International charity, Oxfam has paid tribute to its outgoing Executive Director, Winnie Byanyima for her leadership and influence, particularly in launching a significant organisational restructure.

It follows Winnie’s appointment by UN Secretary-General, António Guterres to head the UN AIDS agency, UNAIDS. She will be Executive Director of the Geneva based agency which leads and inspires the world to achieve its shared vision of zero new HIV infections, zero discrimination and zero AIDS-related deaths.

Byanyima has been at the helm of Oxfam for the last 6 years.

In a statement issued Wednesday, Dr Henrietta Campbell, Chair of Oxfam Board of Supervisors, thanked Winnie Byanyima for her service.

“On behalf of the Oxfam International Secretariat and our global confederation, I thank our International Executive Director Winnie Byanyima for her leadership, energy and commitment to our mission in tackling poverty and inequality,” Dr Henrietta said.

“Whilst it is with much regret to us that Winnie is leaving Oxfam, we wish her every success in this new and highly prestigious role as UNAIDS Executive Director”.

“Winnie has been a hugely influential figure during her tenure here, particularly in launching a significant organisational restructure,” she said.

Dr Henrietta said the restructuring has helped to embed Oxfam’s work and its decision-making more firmly in the Global South, including relocating the organization’s International Secretariat to Nairobi, in a bid “to be closer to the people we exist to serve”.

She said Winnie has been a passionate and highly effective advocate for all Oxfam’s work, particularly around gender justice and in tackling inequality.

Dear @Winnie_Byanyima, we are so sad we'll have to bid you farewell. We wish you the very best with @UNAIDS. We look forward to your successor carrying on your great work. https://t.co/GG5estTY93

However, Winnie’s tenure has not been with no challenges. In February last year, she was confronted with a scandal on reported sexual misconduct exhibited by Oxfam staffers in the aftermath of the 2010 earthquake in Haiti.

There were allegations that Oxfam covered up a prostitution scandal in Haiti where its former aid sexually abused women.

Oxfam staffers reportedly invited underaged female sexual workers to their homes and guest houses that were paid for by the charity organization, whom they paid and abused sexually.

But Oxfam denied claims that it covered up the use of prostitutes by aid workers, insisting that it had publicly announced an investigation at the time

When the allegations became public, Winnie Byanyima came out to apologize on behalf of the organization. She said that what happened in Haiti was heart breaking. 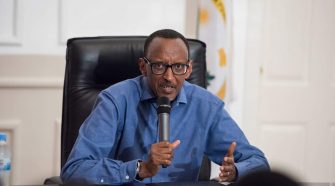