Legislators sitting on the Public Accounts Committee (PAC) of Parliament have expressed worry that the country might lose huge sums of money in recoverable costs to International Oil Companies due to failure by officials from Ministry of Energy to demand for oil data reports for over three years.

This was noted after the Members of Parliament sitting on the committee chaired by Soroti District Woman MP, Angelina Osegge discovered that oil companies did not submit oil reports as required by law for three years to the Ministry for evaluation of the oil sector.

The law requires that oil companies operating in the country generate their oil activity reports and submit it to the Ministry of Energy for every six months but this was not done.

Members of PAC while meeting the officials from the Ministry of Energy led by the Permanent Secretary, Robert Kasande noted that the oil companies did not give their reports to the Ministry for three years. This worried MPs who said that these companies could exploit this laxity to generate money in terms of their recoverable cost.

Legislators discovered that Tullow Oil Uganda used exploration Area II for two years without giving its activity report to the Ministry of Energy.

PAC Chairperson, Agelina Osege said that there could be some officials in the Ministry of Energy colluding with the companies to benefit from the none submission of the reports.

“The fear I have with non-submission of reports is that the country is now going to rely on the good mercy of the oil companies to determine how much we pay them because you don’t have the records of how much they are doing in terms of operations and the monies they are investing,” noted Kira Municipality MP, Ibrahim Semujju Nganda.

Semujju said that this would mean that when the country begins selling oil, the companies will simply appear on table and claim any amount of money which may not be payable by government.

The Permanent Secretary in the Ministry of Energy, Robert Kasande blamed the non-submission of reports by oil companies to the transition from CNOC Oil Company to Tullow Oil as well as the changes within the Ministry officials due to the creation of the oil Authority.

The Committee resolved to summon the Minister of Energy Irene Muloni, the then Commissioners, Ernest Rubondo and Fred Kabanda to appear on Thursday next week with all responsible officials to explain why oil companies did not submit report in the period under review. 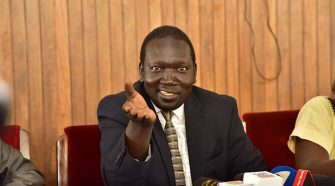