Ahead of the second commemoration of the National Day for Physical Activity, the Minister of Health, Dr Jane Ruth Aceng has advised parents to take the lead in educating their children on the importance of engaging in physical activity.

Dr Aceng says parents must also set an example for their children by not spending much time sitting or watching TV at home as this puts them at risk of suffering Non-communicable Diseases (NCDs).

On Sunday July 14, Uganda will mark the National Day of Physical Activity which was launched by President Yoweri Museveni in July 2018.

Government designated every second Sunday of July as the day to promote physical activity in an effort to strengthen control of NCDs.

The activities for this year’s Day will run under the theme ‘My Health, My Responsibility’ and will be held at the Kololo Independence Grounds. President Museveni will be chief guest.

Participants will take part in a 10-kilometer walk led by the President and will later engage in aerobics, Zumba, sukuma dance, assorted sports activities (football, netball, volleyball and basketball). Kids will also have a gazetted area for playing.

Minister Aceng said there will also be free screening for Non-communicable Diseases at Kololo.

She told reporters in Kampala on Tuesday that physical inactivity is a risk factor for NCDs which include cancers, chronic respiratory diseases and, diabetes among others.

She said NCDs are on the rise both in Uganda and globally, despite the global target to reduce their prevalence by 10 percent by the year 2020.

And according to the Minister, the situation may continue on an upward trend if individuals don’t adopt an active lifestyle.

A survey carried out in 2014 indicated that the rate of inactivity among the adults stood at 8% in the urban areas in Uganda and 3.5% in the rural areas.

Aceng attributed the worrying trend in physical inactivity to the growing rate of urbanization which has accustomed many people to resort to use of vehicles instead of walking. Other factors include technology advancements such as use of computers and remote control which have increased the time people spend sitting.

Work settings that require too much sitting and minimal movements have also contributed to the problem, she added.

Health experts say the issue of physical inactivity bears as much or even worse outcomes among children. The Minister said the problem requires the involvement of all sectors including policies that push schools to ensure young learners engage in physical exercises.

She also said parents must play a primary role especially during the time when the children are home.

“It is the responsibility of parents to encourage children to move away from spending too much time on TV and be more involved in physical activity,” the Minister said.

“If you begin talking to your children, they will learn and stop. Majority of these children see what we do as parents. If you spend much time on TV, the children will do the same”.

She says that maintaining physical activity helps children to be more mentally alert during their learning.

According to Dr Gerald Mutungi who heads Non Communicable Diseases in the Ministry of Health, there is need for a mindset change especially when it comes to the current perception by parents towards their children’s feeding patterns.

“Parents are happy when they see their children obese, they think they are healthy. But studies have shown that children who are obese have higher chances of getting NCDs like Cancer and Diabetes during their adult life,” Dr Mutungi said.

“So let’s not over feed our children thinking we are making them healthy”.

In Uganda, the rate of obesity stands at 5% and it is one of the results of physical inactivity. Obesity is associated with cardiovascular diseases, cancers, diabetes and high cholesterol.

Minister Aceng has appealed to Ugandans to be mindful of the importance to adopt healthier lifestyles by feeding on healthy diets such as fruits and vegetables as well as avoiding tobacco and alcohol use, and going for regular health check ups.

Other helpful activities include dancing, cycling, jogging, gardening and sports.

To employers, Dr Aceng stressed the need to invest in mechanisms that will promote the health and wellbeing of staff. She also advised them to partake in weekly physical exercise activities. 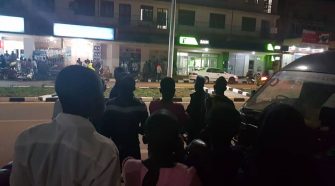