The Speaker of Parliament Rebecca Alitwala Kadaga has Thursday afternoon vowed to take action on the Judiciary and Executive over the Shs 20 Members of Parliament recently allocated themselves off the supplementary budget meant to fight Covid-19.

In company of Parliamentary Commissioners, the Speaker was addressing reporters in an emergency press conference she called to comment on President Yoweri Museveni’s recent remarks on the money as well as a ruling by the High Court on Wednesday that ordered all Members of Parliament to return it.

In his address to the nation on Tuesday, the President said it is not right for MPs to take the money and use it for personal activities especially at a time when the country is fighting the coronavirus pandemic

“That Shs 20m is bad planning. We had planned a certain way and you come and change. It would be morally reprehensible for MPs to give themselves money for personal use when the country is in such a crisis,” the President said.

He said he has recently met with the Speaker, Rebecca Kadaga and told her that the MPs had got themselves into the trap.

“I told her this money was not supposed to be spent on themselves. I told her ‘Take that money and donate it to the district taskforce where you (MPs) come from’. Apparently, there are local politicians who want to compete with our MPs and want to marginalize them”.

He said he had directed the Prime Minister to ensure that MPs are members on the district taskforce so they can play a role in the Covid response.

“So, I told them ‘Go and take the money to the Chief Administrative Officer (CAO). If you take it there, it will limit the damage and people will know you didn’t take the money for yourselves,” Museveni said on Tuesday.

The President further condemned MPs who used the money to purchase food relief, saying they have no mandate to purchase on behalf of government.

“I heard some MPs went and bought things but that’s not good enough. You are not purchasers of government. This is public money, it’s not your money. Who authorized you? You are not the purchasing officer. I will write to the Auditor General to carry out an audit into the procurement of this relief by the individual MPs,” he said.

On the part of the High Court, It agreed with petitioners Ntungamo Municipality Member of Parliament (MP), Gerald Karuhanga and Erute South MP, Jonathan Odur that Parliament had irregularly allocated Shs10bn to the Parliamentary Commission while passing the Shs304bn COVID-19 supplementary budget.

While giving his ruling, Justice Elubu ordered that the Legislators should return the Shs20m to the Parliament Commission or hand it over to their respective district COVID-19 Taskforces that are mandated to fight the pandemic.

In what seemed to be a hit back, a furious Kadaga described decision by court and statements by the President as an attack on Parliament which an independent organ of government.

“As the Commission of Parliament, we are disappointed that for two weeks now, the Media, Central government and the Judiciary are on our back yet we execute our duties within the constitution and I am so surprised that everyone is sticking on the Shs 20m yet we pass a lot of money here and nobody follows it,” she said.

Kadaga read out amount of money she said was passed for other groups together with the the shs 10bn that has sparked public outcry.

“Every district of Uganda got shs 165m, how come that no body talks about them, why don’t you journalists talk about that money? We gave the office of the President shs 15bn, no body talks about that. The Office of the Prime minister was given shs 59bn to buy food – are you aware that they is the money which bought the rotten food – why are you not concerned about that? The serve expired milk to our children but you don’t talk about it, why?” she asked.

She said the Ministry of defence was given shs 29bn and the Health Ministry had requested for shs 62 billion but was given shs 94 bn in support of their huge task they have.

“The Ministry of ICT requested for shs 14bn, they said they were to print and pin posters on roads allover the country but we said the people meant to read those posters are in their homes, who is going to read those posters and we rejected that amount. We instead gave them shs 6bn which included shs 3.5bn for the media and UBC Shs 2bn,” she said.

She notes that every Resident District Commissioner was given shs 55 m, “moreover an RDC who is not elected and no body talks about it.”

She said Parliament has tried hard to restrain itself from interfering with the operations of the Judiciary wondering why the Hight Court would go ahead to decide for Members of Parliament on how to utilize the money.

“Next week, we shall give you more details about the money we have been budgeting so that you follow it up,” Kadaga told journalists.

Kadaga remarked that members of parliament ought to directly help their constituents since they are the elected leaders who have to be visible in their communities they represent.

“Why don’t they want us to be visible, we are elected leaders. So, they want to go and show that they care more about those people than we whom they elected. This is wrong and we shall not accept it,” said Kadaga.

She said the role of appropriation is done by Parliament but not the Judiciary, saying that it was wrong for the High Court to order lawmakers to return the Shs20m to the Parliament Commission or hand it over to their respective district COVID-19 Taskforces that are mandated to fight the disease.

“Appropriation is for Parliament, that is what the constitution says but the judge is sitting in Court saying he is appropriating. So, this is an attack on Parliament by the Executive and the Judiciary and I wanted you to know what is happening. Next week, we are going to read the other supplementary where we have given Shs 400bn in classified expenditure, we shall give it to you,” Kadaga told reporters.

The Speaker said Members of Parliament should disregard guidelines and orders from the Executive and Judiciary respectively in regard to the Shs 20m but instead observe those issued by herself.

“I just want to assure the members of Parliament that they should not panic, just follow the guidelines we issued because now there are three sets of guidelines – from the Executive, from the Judiciary, but we issued guidelines here which follow under our Constitution and rules of procedure and under the National Audit Act,” the Speaker of Parliament.

She asked reporters not to only stick on the shs 20m given to MPs, but also to put government to task to explain how they are using the money allocated to it in the different sectors in the fight against Covid-19. 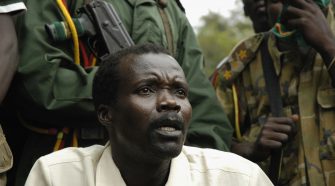 Witness: Kony Once Ordered Children to Step on a Child Who Had Escaped, Until He Died