Parliament has this afternoon been adjourned to next week over failure by the adhoc committee of Parliament to produce a report on what happened when they visited fellow MPs in Gulu.

This came after Members refused to debate a statement by the Minister of Security, Gen Elly Tumwine on the current state of security in the country.

Legislators demanded that they receive the adhoc committee report first before debating the Minister’s statement.

Deputy Speaker, Jacob Oulanyah ruled that the report wasn’t ready to be presented to the House despite it being uploaded on the MPs’ iPads.

His ruling didn’t calm members’ concerns and several points of procedure were noted that the House could not continue to handle any other business yet the reason it was adjourned last week was to allow the select committee to travel and visit the detained members and later report to the house.

The Leader of Opposition (LOP), Betty Aol Ochan wondered why the Chairperson of the select committee, Doreen Amule could not read the report as the MPs had already received it on their iPads.

The Deputy Speaker, Jacob Oulanyah informed them that even though the report was on the MPs’ iPads, it wasn’t ready as it was yet to be signed by the chairperson of the delegation even though all the other MPs had signed the report.

The chairperson of the select committee, Doreen Amule informed Parliament that as chair she was not ready and there were a lot of other things she wanted the committee to handle before the report could be read.

“It is true the report was uploaded on the iPads and the information, but there are other things that need to be handled first by the committee members and chair. There are things that the clerk assigned to the committee and they have to answer to me as the Chairperson, for that matter the report is not ready and I am not ready,” Amule said.

MPs continued heckling at the presiding officer who later decided to adjourn the house after members had become unruly.

The Parrliament committee was tasked to embark on a fact finding mission on circumstances surrounding the arrest of the MPs and their state in Gulu where they are jailed following concerns of torture by security personnel. 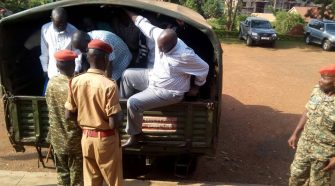