Parliament has on Thursday approved regulations and guidelines that were issued by government to govern political parties and organizations while organizing internal activities without contravening the measures that were put in place to fight against the COVID-19 pandemic.

Last week, government through the Minister of Justice and Constitutional Affairs, Ephraim Kamuntu tabled before Parliament a number of regulations which among others called for conducting virtual meetings and elections.

According to the new regulations all political parties are advised to consider extension of the term of office of the current leaders in case the political parties find out that it can’t hold the activities without contravening the public health act.

The same method would be used in determining party flag bearers on different political seats where party leaders can sit and choose the flag bearer.

These proposed regulations were later referred to the Committee of Legal and Parliamentary Affairs for perusal and report back to the house for either dismissal or approval.

Today the committee Chairperson who is also West Budama South MP, Jacob Oboth Oboth tabled a report before the house in which the committee recommended for approval of the regulations.

The committee members said that the regulations should only apply to infectious diseases that are notified under sections 10, 11 and 27 of the Public Health Act Cap 281.

The report also stated that the regulations should be expanded to include other matters that can affect the holding of normal party activities, including demands posed by a state of emergency or a state of war in Uganda or in any part.

The report further recommended that these regulations would be terminated upon the lifting of the restrictions as stated in the presidential Covid-19 directives.

On the other hand, the motion attracted a minority report from the opposition Members of Parliament whose voice was aired by Busiro East Member of Parliament (MP), Medard Segona who wanted the regulations to be dismissed arguing that they contravene the Constitution and the different political party constitutions.

The regulations passed are to be used by political parties in the time of pandemics, State of emergency and other eventualities that may not necessitate normal party activities. 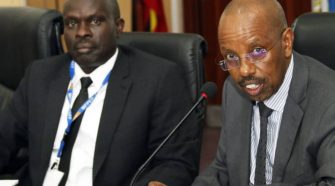