The committee of Parliament on Physical Infrastructure has recommended that it would be unfair and unreasonable to compel landlords to charge rent for their properties in Uganda Shillings.

This was in a committee report on The Landlord and Tenant Bill, 2018 that was tabled to Parliament by the chairperson by Nakifuma County MP, Robert Kafeero Ssekitoleko.

Clause 23 (2) of the Bill provides that all rent obligations or transactions shall be expressed, recorded and settled in the shilling unless otherwise provided under any enactment, or is lawfully agreed to between the parties to all agreement under any lawful obligation.

Ssekitoleko said that, “The Committee is cognizant of the current practice of charging rent in United States Dollars and the attendant challenges and inconveniences of converting Uganda shillings to USD in order to pay rent.”

He said that in addition, charging rent in foreign currencies is perceived by tenants as a crafty way of raising rental rates on a monthly basis in view of the incessant foreign currency fluctuations which are characteristic of Uganda’s economy.

The legislators however said that in the same vein, the Committee notes that Uganda is a liberalized economy where Foreign Direct Investment has been encouraged to permeate and accordingly, many developers of large-scale properties source their financing in foreign currency, mostly USD and service the loans in USD.

“Therefore, compelling them to charge rent in Uganda Shillings would be rather unfair and unreasonable,” Ssekitoleko noted.

On the other hand, the committee recommended that the parties should be allowed the freedom to contract out of the statutory limitations on advance payments.

“The Committee observes that while the Clause is intended to protect tenants from unreasonable demands by landlords for lump sum rent payments, it restricts the freedom of contract of the parties and discourages long term tenancies which has adverse effects on the security of tenure of tenants since no landlord would be willing to offer a tenancy longer than the rent payment.”

He added that the Committee is also cognizant of Clause 25(2) which seeks to allow room for flexibility in cases where the tenant, in his or her discretion in writing, opts to pay rent in advance beyond the prescribed period.

“However, this leaves the matter to the discretion of the tenant and does not consider the interests of the landlord.”

The continuous demand by landlords in some of the commercial arcades in Kampala for tenants to pay their rental fees in US dollars has been a contentious issue for a long time. While in justifying this the landlords cite the volatility in the local currency, the tenants say it is unfair.

In the recent past, the controversy has resulted into traders who rent arcades in downtown Kampala holding protests against the action. 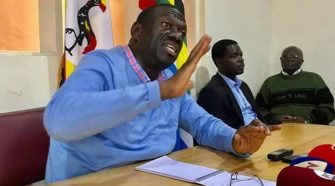