Parliament Committee Tharliamentary Public Accounts Committee (PAC) Chairperson, Nathan Nandala Mafabi has threatened to issue a warrant of arrest to the Accounting Officer of the Judiciary, Expedito Kagole Kivumbi, in case he fails to appear before the committee on Wednesday to account for Shs 34bn mischarge.

According to the Auditor General’s report of 2017, Kivumbi is implicated for mischarging Shs 34bn.

The committee Chairperson noted on Tuesday that last week, Thursday 27, the committee received a petition in line with the alleged misappropriation of funds by Kivumbi in connivance with other officials in the Judiciary.

He told the committee on Monday that the money was spent on Court operational funds, mediation costs, Court sessions, imprest, locus visits, HIV medical allowances and expenditure for Monitoring and Evaluation which items have no direct budget lines.

However, a scrutiny of a detailed document indicating how the funds had been spent revealed that some of the funds had been wired to individual accounts of different Judiciary officers and Justices for their office operational funds, payment of tuition and medical fees among others.

On Wednesday, legislators sitting on the committee were shocked when Kivumbi didn’t turn up for the meeting and never assigned any person to stand in for him but instead chose to send his personal lawyer only with excuses.

Upon discovering that Kivumbi snubbed the committee meeting, the MPs called for detention of his lawyer, Obed Mwebesa accusing him of attempting to obstruct proceedings of Parliament.

Mwebasa was tasked by the committee to make sure that he produces his client after realizing that the phones number he had issued to the committee were off.

The committee chairperson, Nandala thus adjourned the meeting to Wednesday at 10am noting that he Kivumbi fails to appear before the committee, he will be left with no option but to issue a warrant of arrest to him.

20 hours ago
News in Pictures 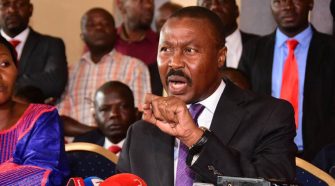