Parliament has condemned the aggressive manner in which the former Buyende DPC, Mohammed Kirumira was arrested by police, saying it was a violation of human rights.

The issue was raised on the floor of the house by Mitooma Woman MP, Jovah Kamateeka who doubles as the Chairperson of the Human Rights Committee noting that the manner in which Kirumira was arrested was humiliating and uncalled for.

“There was use of excessive force against a man whose attorney was his tongue but you cut out the door of his house so as to extract him like a rat which wasn’t necessary,” Kamateeka said.

“As a serving officer, there are disciplinary measures that could have been taken against him; we know that Kirumira was to appear in Court on that day the police could have waited and got him in Court premises or anywhere outside the house,” Kamateeka said.

The legislator noted that the whole exercise in Kirumira’s arrest was done without total consideration of other members of the home who are innocent. She said that the excessive force might have traumatised Kirumira’s wife, children and that no police officer has since made an effort to explain to the wife and other members of the family as to why this arrest was done in such a manner.

“Every accused person has a right and the police knows this being the custodian of law and order,” Kamateeka added.

She condemned the act and asked that the officer who commanded the operation be dealt with appropriately.

ASP Muhammad Kirumira was arrested last week from his home in Bulenga a day after he announced that he had resigned from the Police which he has served for over ten years. However, Police said Kirumira had exhibited errant conduct tantamount to gross indiscipline.

After hours of deadlock following police deployment at his home where Kirumira had locked himself in the house, the officers forcefully broke into his house after using metal cutting saw to cut through his front door. 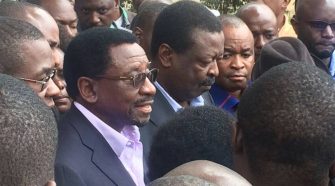