Members of the Tenth Parliament have resolved to among others recall Maj. Gen (Rtd). Matayo Kyaligonza from his duties as Uganda’s Ambassador to Burundi for exhibiting indecent behavior following allegations that he assaulted a female traffic Police officer while on duty.

Sgt. Esther Namaganda, a Police officer was Sunday allegedly assaulted by Gen. Kyaligonza and his body guards who are UPDF soldiers. The soldiers; L/CPL Bushindiki and Pte Okurut John Robert have since been arrested and detained at Makindye Military Police Headquarters.

In her account, Namaganda has accused the Ambassador for physically slapping her twice in the face.

The said assault came after Namaganda stopped the vehicle in which Kyaligonza and his security detail were moving after the driver flouted traffic guidelines.

The UPDF through the army spokesperson, Brig Richard Karemire has since said the army can not penalize Kyaligonza since he is no longer a serving army officer.

However a motion was Wednesday moved on the floor of Parliament by Budaka Woman MP, Pamela Kamugo Nasiyo and UWOPA Chairperson who noted that Kyaligonza’ attack on the woman traffic officer should not go unpunished.

Nasiyo’s motion laid down five prayers calling upon the security agencies to undertake investigations into the incident as well as have the culprits prosecuted in the courts of law as a way of defending human rights.

“Let H.E the President of Uganda recall Maj. Gen. Matayo Kyaligonza from Burundi where he is serving as an ambassador,” Nasiyo recommended.

She as well called upon Parliament to commend Sgt. Esther Namaganda for professionally executing her duties and asked the Inspector General of Police (IGP) to find a suitable promotion for Namaganda in appreciation for the professionalism she exhibited.

Herbert Edmund Ariko who represents Soroti municipality said the code of conduct of Public service spells out the conduct of public officers and the disciplinary actions to take in the case similar to Kyaligonza’s.

“By now the Ambassador must be interdicted,” Ariko said.

Kasambya County MP, Mbwatekamwa Gafa supported the motion noting that Kyaligonza won’t be the first diplomat to be recalled.

“The Ambassador should be recalled immediately because it is not the first incident of recalling an ambassador. You recall that recently, our Ambassador to Washington, Dickson Ogwal was recalled by government for battering his wife. Last month, the Turkish government recalled their ambassador to Uganda because of what they called indecent dressing,” Mbwatekamwa said.

Connie Galiwango, the Mbale Woman MP said the Ambassador conducted himself in a disgusting manner that leaves a bad example to the young boys.

“A woman is a mother, a wife, and deserves respect. Kyaligonza should respect every woman. What sort of lessons will the young boys learn? They are going to be harassing girls because they think it is okay,” she said, calling for Kyaligonza’s resignation.

On his part, Moses Kasibante, the MP for Rubaga North said an Ambassador ought to be an agent of dignity and example, which Kyaligonza has fallen short of.

Nabilah Naggayi Sempala, the Woman MP for Kampala said that the assault against Namaganda waters down the efforts towards gender equity and points to the vice of violence against women in Uganda.

“The pattern of aggression against women in their positions of responsibility is on the rise. This is impunity,” she said, citing recent cases involving Maj Gen Kasirye Gwanga and Deputy Attorney General, Mwesigwa Rukutana.

Muhammad Kivumbi, MP Butambala said: “If there are issues under which public officers should resign, this is one of them. Kyaligonza carries a title of His Excellency and that makes the case grave for a man of his caliber. This Parliament ought to call on Maj Gen Kyaligonza to resign”.

After several legislators submitting in support of the motion, the Speaker, Rebecca Kadaga put up a question for the members to adopt the motion and it was thus passed. 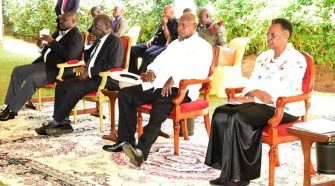