Parliament has come out to disregard the allegations raised against the Speaker of Parliament, Rebecca Kadaga in the media concerning the use of witchcraft, describing them as mischief by Kadaga’s detractors.

The article which was published Thursday by Daily Monitor reported that a traditional healer named Akuze Damian from Kamuli district had sued Kadaga demanding Shs 200m for a charm he allegedly gave to her to help her become Speaker of Parliament.

In the suit, according to the newspaper, the Speaker procured the charm 29 years ago and that the witch doctor has consistently invoked the spirits to proper and keep her in the Office of the Speaker.

Now, in a statement released Friday, the Clerk to Parliament, Jane Kibirige regarded the claims made by the traditional healer as “a figment of the mind” and “laughable”. Parliament has also described the claims as fraudulent.

Kibirige states that Kadaga became an MP in 1989 and therefore the claim that she approached Akuze in September of 1990 seeking that he maker her a leader, which she already was, is wrong.

“The claim that she didn’t have money to pay for the alleged services is laughable,” the Clerk to Parliament said.

The Office of Clerk further clarified that Kadaga has never been member of East African Legislative Assembly (EALA) as alleged. Kibirige’s statement also holds that Kadaga was appointed Mister in 1996, seven years since she had been elected MP, which therefore discredits what the witchdoctor implies that his charm helped Kadaga attain the position “in a flash”.

The allegations by Akuze should be treated with contempt, the Office of the Clerk added.

Parliament also explains that Kadaga was elected the Speaker of Parliament on merit due to her hard work and not because of the magic of the said witch.

“The implication of Akuze’s claim is that he bewitched the entire Parliament, the Presidency and the whole country to elect Ms Kadaga as Speaker. We hope and pray that Akuze’s comical and fraudulent allegations will be dismissed by court,” the statement reads in part.

In defense of Kadaga, the Office of the Clerk says the Speaker is a vanguard in the fight for good governance, the rights of the weak and poor and emancipation of the girl child on the national and international stage and that she will remain steadfast in serving the country.

“Any sober minded person can discern the malice aforethought that is embedded in this mischief by her detractors. She has got to her current station in life through hard work and a god given talent of harnessing the good in others,” Kibirige said. 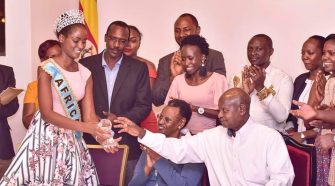