Parliament has formed a six-member committee to embark on a fact finding mission on circumstances surrounding the arrest of the detained Members of Parliament (MP) and their state, as they face trial in Gulu.

According to the First Deputy Prime Minister, Gen Moses Ali, Kyadondo East MP, Robert Kyagulanyi (Bobi Wine) will be paraded before the General Court Martial in Gulu tomorrow after he was allegedly found with a gun.

The other MPs like Paul Mwiru, Gerald Karuhanga and Francis Zaake who were arrested together with Bobi Wine and are now held at Gulu central police station will be produced before the Chief Magistrate’s Court on Thursday.

On Wednesday, several MPs raised concern during plenary on the manner in which their fellow legislators were arrested and questioned why Bobi Wine who is not a soldier would face the army court.

The adhoc committee from Parliament will be headed by Amolatar Woman MP, Doreen Amule who chairs the Committee on Defence and Internal Affairs.

The Speaker Rebecca Kadaga has instructed the team to travel this evening and ensure that they are in Gulu by morning.

However Butambala MP, Muwanga Kivumbi in his submission told the House that it would be inappropriate for Parliament, an institution that swore to defend the constitution to be witness to an illegality (trying a civilian before the military court martial).

Similary, Kasese municipality MP, argued that putting Bobi Wine on trial before the army court would set a dangerous precedent where one’s adversaries frame them by planting a gun in their house as a set up.

In her response, the Speaker reminded the House of the case of Nakawa MP, Michael Kabaziguruka who was last year tried before the same army court.

“Members, Hon Michael Kabaziguruka was tried before the court martial and he was an MP. What did you do about it,” she said. 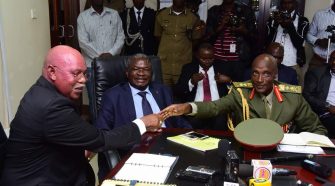