Parliament has distanced itself from discussing and deliberating on the arrest and alleged ‘improper’ detention of the former Inspector Gen of Police, Gen Kale Kayihura.

The decision to pay a deaf ear was made by the Speaker of Parliament, Rebecca Kadaga’s ruling on a matter of National Importance that was raised by Kisoro Woman MP, Rose Kabagenyi.

Kabegenyi questioned the “unusual” detention of the General which has gone beyond the required 48 hours that are required for one to be produced before Courts of law.

“Without dwelling on the merits of the case, I would like to raise pertinent issues pertaining the anxiety of the people of Kisoro and the country at large,” the Kisoro Woman MP told the House.

She added that “We are disturbed by the conflicting statements surrounding the circumstances of the arrest and detention of the former IGP and we are alarmed by the media speculation and the information the media is feeding to the country”.

The right of personal liberty is a fundamental right guaranteed under article 23 of the constitution, she said.

Kabagenyi was however put to order by Busongora County MP, William Nzoghu who noted that the MP was raising the issue about the former IGP who was the custodian of law and order.

“General Kayihura has arrested many people and has actually criminalized many people including the people whom he arrested and superintended over their killings,” Nzoghu said.

“The Commander- in- Chief (C-in-C) in his wisdom has arrested General Kayihura in connection with his dealings as far as criminality is concerned in this country and for the safety and security of our country,” Nzoghu added.

“Is the Member in order to actually challenge the decision which the C-in-C has taken to ensure peace for this country and make sure Kayihura pays for his sins?”

Kadaga thus asked Kabagenyi to quickly clarify on the ultimate objectives of her submission.

Kabagenyi then said that, “Given the circumstances around Kayihura’s arrest, we just want to know why he was arrested, and we want government to guarantee the constitutional right of 48hours that a person has to be produced in court.”

In her ruling, Kadaga said, “I believe the matter is under investigation, we have no value addition at this stage, let’s leave that matter.” 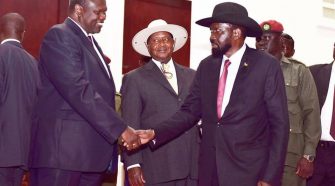