The Parliament Library has decided to go fully digital, in a move that will make it better, easier and faster in accessing its documents and materials.

“We decided to digitise as a solution to keep our materials in multiple locations. With the digitisation, we can have the backup option,” said Mr. Innocent Rugambwa, the Director Department of Library Services in the Parliamentary Service.

He decried the lost or destroyed records pertaining to the country’s colonial, independence and post-independence periods during the turbulent period between 1971 and 1986.

He also said that the changes in Parliament, its Committees, Committee leadership and Secretary to Committees meant that several documents and reports go missing with every change.

He also said that when MPs leave at the end of their term of Parliament, and as staff retire, they leave with their records, which would be useful to incoming parliaments and the public.

“You cannot buy a Committee Report; if one does not leave these reports, continuity becomes a challenge,” said Mr. Rugambwa.

The digitisation project is targeting two million pages and is expected to be completed in September 2017 having commenced in July.

The Parliament Library is also sourcing for documents and books from other libraries including the Ministry of Justice, Makerere University and Uganda Management Institute.

The British Library, House of Commons and Parliament of New Zealand are other areas Parliament of Uganda is looking at for resources.

“Through this process, we are building synergies with those institutions and we shall give them rights to access our records. Everything will eventually be posted on the Parliament website,” said Rugambwa.

The Director said that they had a plan to reach out to the public through the media requesting them for documents especially those in private libraries and collections.

Without destroying or damaging the item, staff of COSEKE pull a document apart and have it scanned page by page.

The document is indexed – describing and identifying it for easy identification and location, before being uploaded on the Parliament intranet. Documents are then bound together and archived for later retrieval.

Sarah Namulemeri, the COSEKE Data Conversion Team Leader, said she was impressed with their speed and was optimistic that the work would be completed in three months.

Space consideration is one of the reasons pushing for digitisation, since it would require several floors of a Library to keep the ever-increasing materials the facility receives.

Following the scanning, documents will be moved to the Library archives, keeping only a physical copy in the Library, for reference by only those that wish to use hard copies.

The Principal Librarian, Ms. Harriet Nalusiba, said that the international trend is digitisation because it allows users to refer to documents without the need to move to the library.

“We cannot keep everything in physical format. We believe it will be easier for us; it will be quicker, better and faster for everyone involved,” said Ms. Nalusiba.

Delayed Financing of Electoral Activities Ahead of 2021 Worries Auditor General 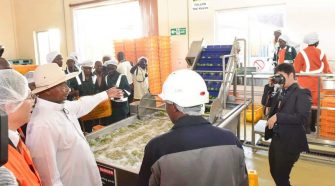