The Speaker of Parliament, Rebecca Kadaga, has directed three members of Parliament who recently returned from Dubai, to immediately go to quarantine as a way of safeguarding their families and other MPs from COVID-19 infection.

They are said to have visited Dubai as the Physical Infrastructure Committee. They went in company of two staffers of Parliament.

Uganda’s cases of Coronavirus have risen to 9 from since the first confirmed case was reported on Saturday. All the 9 have recently arrived in the country from Dubai.

The Minister of Health said the new cases have raised a red flag – Dubai – which was earlier unknown to health authorities in Uganda since it had not been categorized as a high risk country.

As such, the Ministry has appealed to all individuals in Uganda who have been to Dubai in the last two weeks to alert authorities so they can be tested.

“We appeal to travelers who have been in Dubai in the last two weeks to call our toll free line, so we can have them checked. This is a battle that we must undertake together with cooperation,” she said.

On Tuesday, several MPs supported the proposal to have the three legislators as well as the staff to be isolated and placed under quarantine. They said that by continuing to move freely, they are exposing their families and other members of the public to likely infection.

“Madam Speaker, I request that we all get tested so that the country can be reassured that its representatives are secure,” she said.

She also that one of the MPs’ (Sempala) temperature was found to be 38 and he was left to enter the precincts of Parliament, questioning why that would happen.

Kawempe North MP, Latif Sebagala also submitted saying that the members are isolated in the interest of their families.

“How about their families? Because even their families are not safe. A directive to quarantine them by force should be issued now”.

Sebagala also reported to the House that on Saturday, one of his constituents returned to Uganda aboard Emirates but was allowed to go.

“I have two families in Kawempe. The driver of this constituent and a relative. They have been calling Ministry of Health but no response. They are 24 members in general,” he added.

Bugiri Municipality MP, Asuman Basalirwa in his submission asked that the process of gazetting the statutory instruments that back the Presidential directives be fast tracked.

“This Parliament is making communication and the President. Unfortunately, the Public Health Act requires that statutory instruments are made to give guidelines on how people should behave. There’s no clear legal framework minister should introduce subsidiary communications”.

On this, the Minister of Justice, Prof Ephraim Kamuntu told the House that the Office of the Attorney General is preparing the statutory instruments and tht they will soon be read to Parliament.

The Speaker ruled that the National Task Force which has been constituted will take up the issue of ensuring that the said MPs are quarantined. MPs Francis Mwijuke, Bernard Atiku and Esther Anyaku were nominated to the Task Force.

Isingiro MP Byarugaba Alex Bakunda said that 20 people from his constituency who traveled to Dubai have gone missing. He said that Police has been struggling to track them.

“We must learn from what has happened. Just the other day China was the first country to report. They have put up serious measures. But we failed to learn from what others have done. Italy relaxed and we see what’s happening. This isn’t far from us. The worlls is a small village”

“We are told some health facilities don’t have face masks. Also, we need to consider a short recess for us MPs for a month to go out and mobilize our people and guide them. What are we doing here?” 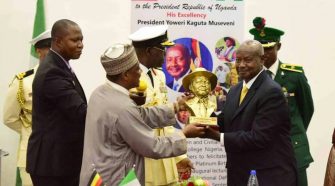