Parliament has Wednesday afternoon passed the Traffic and Road Safety amendment bill 2019 with Members of Parliament rejecting a clause that makes it mandatory for road users to assist accident victims.

The bill that was fronted by government seeks to strengthen road transport regulation and road safety management in the country while addressing the existing challenges such as emerging trends, increased number of road users including motorcycles, increased road accidents and the need to conform to the regional and international agreements that Uganda is signatory to.

The bill had proposed to make it mandatory for road users to render assistance to accident victims but this has been rejected by Members of Parliament.

They noted that road users have already been rendering assistance to the victims and they see no reason to include this in the law.

Parliament however has maintained a clause which requires health facilities to first treat accident victims before inquiring whether the victim will be able to meet the hospital bills or not.

Parliament has also approved a clause that deals with licensing of garages in the country to help people who need their help to be able access them quickly .

MPs also approved the licensing of digital transport systems in the country which he says will greatly improve on the security of passengers.

Accordingly, Clause 36 of the Bill seeks to require a person who wishes to provide public transport using online digital application to apply to the competent authority for authorization to operate the online digital network.

The Bill requires; an applicant for a license to submit a tax clearance certificate from Uganda Revenue Authority, obtain the relevant insurance, submit periodic reports and information to a competent authority.

The public transport sector in Uganda has in the recent past witnessed the proliferation of online digital applications such as Uber, Safe boda, Bolt (formerly Taxify) and little cabs among others.

Other clauses that have been approved include licensing of garages, all passenger vehicles must belong under associations known as SACCO, every person to drive a car must go through a driving school and all driving schools with their trainers will be licensed by the ministry of works. 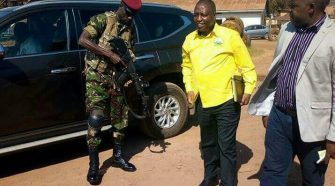