The Chairperson of the Parliamentary Public Accounts Committee on Local Government and Aswa County Member of Parliament (MP), Reagan Okumu has called upon the Auditor General to carry out a special audit into the tax payers’ money irregularly spent by the Uganda Local Government Association (ULGA).

Okumu who doubles as FDC Vice President for Northern Region made the call on the floor of Parliament on Thursday while reacting to media statements that were made by ULGA leadership questioning the authenticity of the committee report.

ULGA leaders expressed reservations to the committee report accusing the Chairperson of being insensitive and continuously accusing local governments of incompetence and corruption.

Today, Okumu said that the comments coming from ULGA members are so unfortunate given the fact that they haven’t even had a chance of seeing the contents of the report.

He said that the Local Government Accounts committee does not deal with ULGA since it is a private Association and not a government department.

The legislator accused ULGA of continuing to spend tax payers money collected from all districts  by ULGA yet it is simply an Association of district Chairpersons and sub-county chairpersons.

“I want to seek your indulgence Madam Speaker to ask the Auditor General to audit ULGA because it has come to our attention that ULGA which is a private Association gets Shs 6 million per district every year for membership,” Okumu said.

“Last financial year, they got the money directly from the Ministry of Finance. We now have 130 districts, and whether new or old, the district must pay since the money is deducted automatically.”

According to Okumu, the mode of operation of ULGA is marred with irregularities, at the expense of the tax payers’ money.

“What they are doing is something irregular. This is an Association formed for chairpersons of districts. So, I want to finally request through you Madam Speaker, we need to reach out to the Auditor General because these are public funds for these fellows to be audited. They have no right, our mandate is with Accounting Officers not with districts chairpersons”. 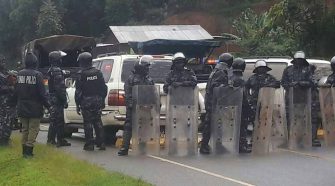