Parliament has Tuesday rejected government proposal to tax loss-making companies for the past seven years to a tune of 0.05 percent.

This was while passing the Income Tax Amendment Bill which sought to introduce the income tax requirement for a taxpayer who has carried forward assessed losses for a period of seven years consecutively.

While defending the proposal, State Minister for Planning, David Bahati argued that the amendment seeks to block every gap where a business that is making profits takes advantage of company self-assessment of an assessed loss to avoid paying revenue for years.

He argued that some tax payers have been using this regime to abuse the provision that provides for indefinite carry forward losses.

Government among a number of incentives to encourage investment in the country allowed companies that declare losses at the end of year to have their investment capital allowance deducted before they pay taxes in order to allow them expand their business.

Addressing members during the debate, the committee Chairperson, Henry Musasizi defended the minority report that supported the proposal that it is premised on the failure by the Uganda Revenue Authority (URA) to crack the whip on several companies that evade tax under the pretext of making losses.

“There are companies that carry two books of accounts, one presented to the regulator while the other is for internal use. Through such they hide from paying tax; we interacted with URA officials and they told us that they have no capacity to track these companies,” Musasizi said in defense of the committee’s decision to pass the tax.

Musasizi’s report was challenged by Budadiri west MP, Nandala Mafabi who noted that government through the regulator should instead strengthen internal mechanisms to track any tax evasion rather than levying a tax on a loss.

Minister Bahati further argued that government is set to collect over Shs 40bn once the tax is approved as a measure to block the evasion.

Despite Bahati’s call, legislators voted to have the provision for the tax deleted from the bill and hence rejected the tax proposal. 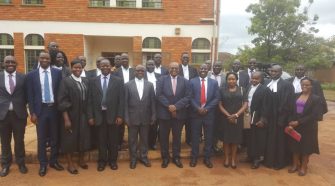