The Parliamentary committee on Human Rights has summoned city socialite, Brian Kirumira commonly known as Bryan White, as part of investigations into allegations of rape, torture and assault brought against him (Bryan White) by two girls that he formerly employed.

Parliament took interest in the allegations after a matter of National Importance was raised by Bugabula South MP, Henry Maurice Kibalya after the girls went public with the allegations, that Bryan White had abused them sexually.

The victims identified as Vivian Mutanda and Stella Nandawula have since given TV interviews claiming they Bryan White raped and tortured them at the time they were working for his Bryan White Foundation. The girls further allege they were not paid for a period of over two years.

Some of the girls claim Bryan had group sex with them when they were residing at his Buziga home while another one (Leticia Nabulime) has alleged she suspects he drugged her before he slept with her. The allegations have been reaffirmed by Nabulime’s mother who says Bryan White got her under-aged daughter pregnant.

While appearing before the Parliament, Mutanda who worked as an Usher and Assistant Secretary at Bryan White Foundation said that due to the alleged rape, she was forced to abort three times

Mutanda said Bryan White kidnapped them at his residence in Buziga and every time they tried to run away, he would send to them men who would take them back.

“On top of treating us in such a dehumanizing manner, Bryan White has not paid us for the period we have worked for him. Whenever we could ask for our pay, he would insist that we had no need for the money since he accommodated us as well as fed us,” Mutanda said.

She further accused Bryan of using security personnel to keep them locked at his residence and that on several occasions, he threatened them, saying they had no chance against him since he was working for government.

She requested that Parliament swings into action and helps her recover all her pending payments since she worked for it.

Mutanda appeared before the committee together with Stella Nandawula’s mother who asked the committee to help her access her daughter who has been in hiding since February after running away from Bryan White’s home.

However, Nandawula has since come out to denounce the accusations she made against Bryan White, noting that she was used by mafias to taint her former boss’ image. She has since apologised.

Commenting on the same, Mutanda said isn’t surprised by Nandawula’s apology, noting that she could be under too much pressure ever since she went back to Bryan White’s residence.

The Committee has summoned Bryan White to appear and defend himself on the allegations against him after which (and after hearing witnesses) it will report back to the House with a report on the matter. 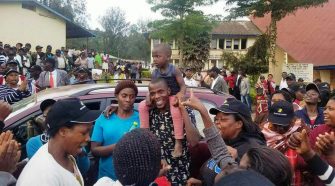