The Speaker of Parliament, Rebecca Kadaga has summoned the Minister of Health, Dr Jane Ruth Aceng to account for the funds that were appropriated by Parliament to fund the Uganda Virus Research Institute (UVRI).

This follows a recent concern that was raised by the UVRI Director, Prof. Pontiano Kaleebu who had recently appeared before the Parliament Public Accounts Committee (PAC).

UVRI is Uganda’s central testing facility for samples for Covid.

Prof. Kaleebu told Members of Parliament (MPs) that the Institute has never received any funding from the national treasury to fund the COVID-19 activities.

He said that as such, UVRI has had to suspend all other activities for the 3rd and 4th quarters and diverted Shs 780 million from other programs in order to fund COVID 19 activities.

Kaleebu noted that UVRI presented a budget of USD 1.7 million to the Ministry of Health to help fund COVID-19 activities, but that to date, no funds have been availed.

He added that the Institute has all along been depending on the donations from partners like the World Health Organisation (WHO), Centre for Disease Control (CDC) and the Jack Ma foundation.

This matter has prompted queries from legislators as well as members of the public on the accountability of the funds that were appropriated by the Parliament while passing the Shs 304bn supplementary budget in April, 2020.

Bunyole West MP, James Waluswaka said it is disturbing to see that despite the appropriation to UVRI through the Ministry of Health, the funds are yet to be released to the Institute.

In her ruling, the Kadaga noted that, “We did the supplementary in April, so let the Ministry of Health come and explain to us what has happened to the money appropriated for UVRI and the Nitrogen plant and this is urgent”.

Commenting on the delayed release of the funds to UVRI last week, the Permanent Secretary, Dr. Diana Atwine noted that the delay is as a result of the lengthy process involved in transfer of funds as provided for in the Public Finance and Management Act.

Dr Atwine said that under Public Finance Management Act, transferring money that is appropriated to Ministry of Health to UVRI requires a Memorandum of Understanding which also has to go through the Solicitor General.

She however noted that the Ministry has been partnering with UVRI and clearing some bill which include; paying UVRI staff and that all the test kits, PPEs, fuel, and other items. 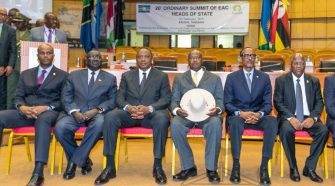 After Calling Off Talks with Uganda, Rwanda Cancels EAC Heads of State Summit