The Committee on Commissions, Statutory Authorities and State Enterprises (COSASE) of Parliament has threatened to halt the appropriation of funds to NAADS in the coming financial year 2018/19, if government fails to come up with a legal framework that guides Operation Wealth Creation (OWC).

This was during an interface between COSASE chaired by Bugweri county MP, Abdu Katuntu and the Minister for Presidency Ester Mbayo, State Minister for Agriculture Christopher Kibazanga, Attorney General William Byaruhanga, officials from OWC and NAADS over the legality of Operation wealth creation.

The Committee notes that the creation of OWC as directed by President Museveni in 2013 seems to have taken away the core functions of NAADS thus rendering OWC an illegal operation since there is no legal frame work guiding its activities.

The MPs stated that under the current arrangement, OWC cannot be summoned to account for the funds it uses under NAADs.

The Attorney General, William Byaruhanga informed the MPs that, a year ago, he advised the Ministry of Presidency to formulate the legal frame work for operations of OWC but up to now, it has not been submitted to Cabinet for review.

After a debate for hours, Katuntu ruled that the responsible Ministries be given one more month to come up with a Bill entailing the legal framework for OWC or else Parliament withholds funding.

“The Minister for Agriculture and the Minister for the Presidency have been given 30 days within which to report back to this Committee and by May 24. We expect a Bill already in Parliament such that all reforms are put in place,” Katuntu ruled.

Prior to this decision, the Busiro East MP, Medard Lubega Ssegona had proposed a motion for Parliament starting next financial year to halt NAADS funds until the mix up of the two entities is solved.

In the financial year ending 2017/18, NAADS was allocated Shs 279 billion of which Shs 17 billion has been used to procure agro-inputs and seedlings for OWC that is coordinated by officers of the UPDF.

OWC was set up by President Museveni in 2013 after NAADS was severally accused by Ugandans of not delivering seedlings to beneficiaries yet billions were spent.

While OWC officers overseee the distribution of seedlings, procurement is done by NAADS and Uganda Coffee Development Authority who then account for the spent funds. 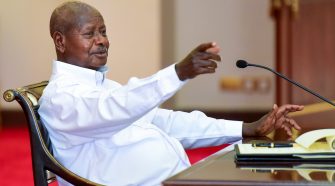