China Communications Construction Company (CCCC) that is undertaking works at Entebbe International Airport is in trouble over failure to respect rights of people with disabilities at the site.

This followed a complaint raised by Rose Mutonyi, Bubulo West MP over what she alleged was humiliating treatment of one user of the international airport.

Mutonyi narrated an incident that took place on Tuesday January 9, 2018 when one white passenger was forced to shout on top of his voice, demanding for a carrier to ferry his luggage because of the disruptions in the renovations.

“Are we going to have that type of treatment for the old and disabled? It is happening to our people every day. Something needs to be done otherwise, nothing is going to talk for them.” Mutonyi said.

Her counterpart, Mbale Municipality MP, Wamai Wamanga warned government that failure to address the concerns would render efforts to attract tourists to Uganda useless noting; “We are trying to convince people to come here, but if that person goes back and narrates his ordeal, then such a thing can do minus.”

Ruth Nankabirwa, the government Chief Whip defended the Executive arguing that sometimes such inconveniences are inevitable when any site is undergoing any form of renovations.

She explained; “I want to assure the country that this will stop because the project has a time frame. But this doesn’t mean we will not check. I will ensure the Minister is on ground because Entebbe is our eye and ensure our people aren’t inconvenienced.”

However, William Nzoghu Shadow Works Minister wondered if that was all government could do and called for temporary intervention to help the affected persons.

Nzoghue argued; “We have been to other airports and you still have a service that is descent, why isn’t it applicable to the Ugandan situation?”

Hellen Asamo, the represenative fot persons with disabilities in Eastern Region joined the debate saying that services for the people with disability are always available, but the users are forced to demand because Uganda has made the said services very selective.

“There is critical need for people in Uganda to wake up. I think it is an issue of negligence not renovation,” Asamo argued.

Nankabirwa fired back saying the inconveniences were temporary and would stop once the site is handed over to government.

Deputy Speaker Jacob Oulanyah said there was no need for Parliament to go forth and back with the matter because when contractors are handed sites, it was imperative that alternatives are created.

“It is the responsibility of the contractor to ensure the convenient ways are in existence. It is a matter that doesn’t need to be debated. Why are they making people suffer like that?” Oulanyah asked.

It should be recalled that renovations on Entebbe Airport started in May 2017 and the project is estimated to cost over USD 200 million, approximately Shs 713 billion.

The scope of works will involve construction of new cargo terminal, oil firm and strengthening of aero planes runway. 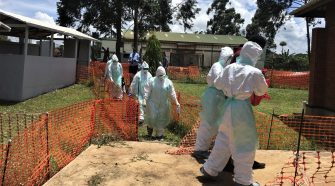 U.S Confident in Uganda’s Capacity to Respond to Ebola