The motion to honour Emong was moved by Anthony Okello, the Kioga County MP, during a Wednesday plenary session chaired by Deputy Speaker, Jacob Oulanyah.

Uganda had a sole representative at the event due to lack of facilitation for other five athletes who qualified, Okello said while presenting his motion.

“Emong put Uganda on the world map at the world Para Athletics championships in London. I ask that Government honours the achievements of Emong and provides adequate incentives in form of financial support,” Okello said.

Okello lauded Emong for his incredible performance raising Uganda’s flag higher in the eyes of the entire world.

MP Okello asked government to provide a house for Emong and preferably a car. “We ask that Government allocates more funding to the sports subsector of the Ministry of Education and sports.”

John Chrysestom Muyingo, the State Minister for Higher Education, said government is committed to honouring all the promises made to the athletes.

Rose Mutonyi Masaba, MP Bubulo West, suggested that Emong be accorded the same state dinners so “we can honour our non-discrimination policy”. 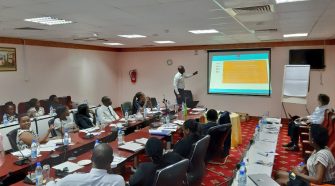