Social media was Sunday morning awash with information that the motormouth pastor was arrested in the morning as he was preparing to preside over Sunday service at his church before whisking him away in a police van.

The reports further purported that prayer grounds have been cordoned off by Police and the Military.

However, in a telephone conversation, Owoyesigyire told SoftPower News that no person has been arrested from Pastor Bugingo’s church and that security has not cordoned off the area as reported on social media.

Also, this news website has since established that praising and worshipping are going on normally at House of Prayer Ministries ahead of the Sunday service.

The controversial pastor is under criticism from female activists over his utterances on Wednesday in a church service against his wife Teddy Bugingo’s health.

The couple has not been on good terms for a couple of years and in his sermon on Wednesday, Bugingo said that his wife suffered Fistula for ten years, a condition he said he persevered. He further disclosed publicly how he had to buy lots of cotton pieces and sanitary pads for the ex-wife during the difficult period.

His remarks sparked condemnation from sections of people including female politicians, activists and fellow pastors who regarded this as disrespect towards women.

Some of them vowed to Sunday collectively buy pads and cotton and repay the pastor as a message to ask him stop disrespecting the mother of his wife and women in public.

Bugingo would Saturday apologize, saying he never intended to disrespect anyone including the mother of his children. He explained that his remarks were only echoing a testimony Teddy herself had years back given in church telling the congregation how God had miraculously healed her from Fistula which had taken ten years. 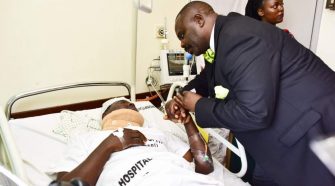