Fr Gaetano says Bobi Wine did no wrong in using a Christian song to deliver his message, and labeled his (Bobi Wine) critics as attention seekers.

The cleric who is also a strong critic of President Yoweri Museveni and was part of the 1994-1995 Constituent Assembly, said this on Friday while addressing journalists at a news conference held at Grand Holiday hotel in Mbarara town.

“They claim that the song is religious, did they want him to sing satanic songs? These believers understand that we all have victory songs like ‘Turyabasinguzi’ [we are victors], ‘We shall overcome’, all sung by people then. When do we sing such victory songs? Is it when we go to heaven?” asked Fr Gaetano.

He cited a number of other religious hymns which like Bobi Wine’s song have themes of victory, and that are meant to be sung by believers.

In recent days, a section of pastors from the Pentecostal faith including Pastor Martin Ssempa of Makerere Community Church and Pastor Joseph Serwadda of Victory Christian Church have strongly criticized the song by Bobi Wine which they claim misrepresents the message in the original song. They say the afropop singer distorted the message which refers to a victor’s crown that believers will wear in heaven by substituting ‘heaven’ with the Uganda led by Bobi Wine.

However, Gaetano says the ‘Tuliyambala Engule’ song portrays the ills that the country is grappling with.

“Such songs bring out the things which are not right in our lives, homes and in our churches and even in our country. Therefore we must fight for the victory when we are still in this world”.

“If what Bobi Wine was reflecting on was not happening in Uganda, there I would condemn him too. But everything hinted on in his song is happening. To me, he is liberating this country” said Gaetano

He instead advocated for more of such songs which in his view have a greater impact than mere  speaking. Gaetano says that in any case Kyagulanyi’s song is a sign of hope for peaceful transition of government.

Fr Gaetano Batanyenda now joins Bishop Zac Niringiye and Pastor Solomon Male of Arising Christ Ministries who this week came out to side with Bobi Wine.

“Tuliyambala Engule is a hope song for a peaceful transition like what recently happened in DR Congo after over 50 years of power struggle. During Amin’s regime we thought of transition of government but it happened so Ugandans should not lose hope,” the cleric said.

He termed pastors who recently castigated Bobi Wine over the song as being seekers of attention from President Yoweri Museveni.

“Those pastors including my friend Ssempa know that they are wrong but they only want to make their Head happy,” he said.

“For example, on Christmas, Pastors were called for a party at State House which is a political house. Why did they go there? Again we are celebrating the NRM anniversary on January 26 and I am sure a pastor will be called to pray on the function. To me, if you condemn ‘Tuliyambala Egule’ song, then you shouldn’t attend that function [NRM anniversary] because that will be hypocrisy,” he explained.

He appealed to religious leaders to concentrate on spreading the gospel instead of attacking youthful liberators.

“I want to appeal to my fellow religious leaders both Seniors and juniors. Let’s preach the word of God and tell the truth. It will make you peaceful and it will set you free”.

He says that Ugandan religious leaders should emulate what the church in the neighboring Democratic Republic of Congo (DRC) is doing by vigorously fighting for the people.

He also used the news conference  to throw his weight behind the proposed policy through which government seeks to regulate the religious institituions, particularly the academic qualification for clerics.

He says that most of the religious leaders are selfish minded with intentions of conning followers of their money.

“I totally agree with the policy because some of us pastors, we are money minded. Like that thing of holy rice where did it go now? I hear some pastors have holy water. Is it give out for free?”

“This tendency where one goes to Tanzania or Kenya and comes back with money singing Alleluiah to start a church should stop,” he added. 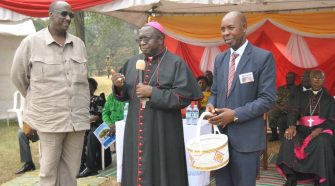 Kasese: Saleh to Partner with Church to Increase Agricultural Production