Kenya’s former presidential candidate, Martha Karua has rallied Ugandan women under the Inter Party Organisation for Dialogue (IPOD) to rise up and fight patriarchy so as to increase their political space.

The Leader of the National Rainbow Coalition (NARC)-Kenya made the call Tuesday while speaking at the IPOD Women Leaders Conference at Méstil Hotel in Kampala.

The conference was organized under the theme ‘Enhancing Effective Participation of Ugandan Women in Political Leadership and Decision Making’.

The outspoken Kenyan politician shared her experience of what she has gone through and how she defied all the barriers set before her as a woman leader and prevailed.

If women don’t stand up against patriarchy, a system of society or government in which men hold the power and women are largely excluded from it, their political space will further dwindle, Karua said.

She noted that under such a system, women and girls are always groomed to believe that they should be subordinate to men and should never advance their rights whatever the cost.

“Men entertain the same fears that we own but they never cry out because that is how they are groomed from childhood. The men always want to curve out your space, they want to reduce you to an object in a sense that a woman should be a wife and not a leader,” Karua said.

“You will find patriarchy everywhere, even within yourself but let’s not suppress our leadership. It’s inborn in women, nurture the voices of women and girls they are needed in shaping our society.”

The politician rallied women to resist systems that give privileges and powers to boys over girls and men over women.

In addition, she advised women to have confidence and belief in themselves, adding that they must always fight for the mandate of women when they get into positions of authority.

The 62-year-old said she is still alive to her dream of becoming President of Kenya who will lead the country with dignity and uphold the values of all citizens.

“Good leaders have the ability to deliver. The capacity to command respect should be based on what you deliver and not through coercion and force,” Matembe said.

She further urged them to be God fearing. 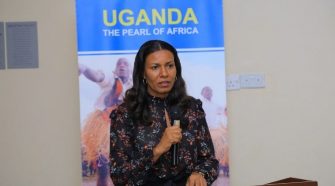