Kateregga’s victory followed a serious contest with eight other fellow students who put up a serious competition.

He polled 3,912 votes and was followed by Independent Joshua Mukisa who polled 3,365 votes.

The duo were followed by NRM’s Julian Taliwaku with 1,465 votes, FDC’s Milly Namuddu Milly with 1,298 and Independent candidate George Mutumba who got. 866 votes. The other contestants were David Musiri (637), Winter Nsimire (81), Osbert Arinda (55) and Umar Wageya (44) all Independents.

Kateregga has since been congratulated by the university Vice Chancellor, Prof Barnabas Nawangwe.

“I congratulate Kateregga Julius of Bachelor of Arts with Education II upon being elected the 85th Guild President of Makerere University. I look forward to working with you to make Mak greater,” the VC wrote in a tweet.

David Musiru, one of the candidates also congratulated Kateregga and asked him to remain committed to his promises to students.

“I welcome you back from the ballot. I take this humble opportunity to thank whoever voted Gen. Musiri for guild. Thanks for trusting me. Let me use this same opportunity to congratulate my comrade Julius Kateregga for winning the race,” Musiri said.

He added, “I humbly request you to serve the interest of the average student and stick to the values of people power. Keeping your pledges of 15% tuition revocation, military off Makerere and integrity as you have promised through the press”. 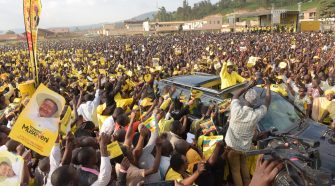