Members of the opposition grouping, ‘People’s Government’ have Friday revealed that they are at the final stages of dragging President Yoweri Museveni to the International Criminal Court (ICC) for allegedly committing crimes against humanity.

While addressing journalists at their offices at Katonga Road in Kampala, Erias Lukwago, the Deputy President of the ‘People’s Government’ said the announcement to take Museveni to the ICC is a follow-up to their recently announced ‘Twelwaneko’ campaign where they rallied Ugandans to rise and defend the Constitution of the land as well as State agencies and institutions.

Lukwago was flanked by Dr Kizza Besigye, the ‘People’s Government’ President and his Ministers.

It states: “All citizens of Uganda shall have the right and duty at all times to defend this Constitution, and in particular, to resist any person or group of persons seeking to overthrow the established constitutional order.”

The Article further provides for Ugandans to do all in their power to restore the Constitution after it has been suspended, over thrown, abrogated or amended contrary to its provisions.

He explained that dragging President Museveni to the ICC is one of the activities the ‘People’s Government’ has organized with an aim of defending the Supreme law. 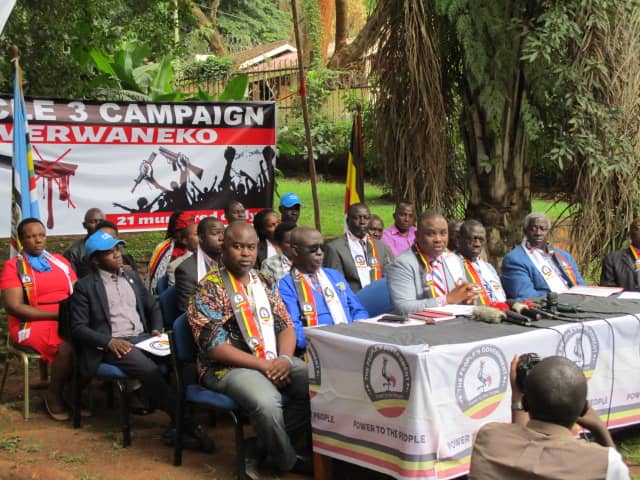 The Mayor said the latest move seeks to prove that the 2019 is a year of working not mere talk.

“We are taking it a notch higher by taking the necessary steps under the law to drag Gen Yoweri Museveni and his accomplices to the ICC for the crime he has committed against the Citizens of this country,” Lukwago said.

“Not the individuals you see here or political actors but all Ugandans have suffered under the york of Mr Museveni’s regime. So, what we have decided to do is to prepare a petition which is already done,” he said.

In their petition seen by this news website, the ‘People’s Government accuse President Museveni of suppression, torture and extra-judicial killing of Ugandans.

“As means of holding onto the illegitimately and illegally assumed power, General Museveni and his accomplices have continuously unleashed violence and terror against the Citizens of Uganda to keep them muzzled and subdued,” the petition reads.

“Additionally, Gen. Museveni’s regime has, at the alter of consolidation of a personal rule, committed gross human rights violations and atrocities, including but not limited to torture, suppression, repression, incarcerations and elimination or killing of people opposed or perceived to be opposed to the sitting regime,” the petition further reads.

They cite the clashes between security forces and the cultural leadership of Rwenzururu in Kasese that took place in the aftermath of the 2016 general elections.

They say that during the incident, security forces under the command of Gen. Museveni and his accomplices raided the palace of King Charles Wesley Mumbere, a cultural leader of the Bakonzo people and massacred hundreds of people in the most savage manner one can imagine.

They also accuse the President of commanding security personnel to invade Parliament as well as the “desecration” and “abrogation” of the national constitution in 2017 during the debate on the constitutional amendment to remove Presidential age caps.

The petitioners cite Speaker Rebecca Kadaga’s letter to the President seeking explanation as to identify “mission and purpose of the unsolicited forces and why they assaulted MPs.

“Besigye’s camp further accuse the Commander in Chief of using SState security apparatus and a plethora of military groups to persecute, dehumanise and humiliate political opponents, members of Civil society organisations and the citizenry as well as enforced disappearances and curtailment of civil liberties.

Lukwago and his group now want the ICC Chief prosecutor, Fatou Bensouda, to initiate President Museveni’s prosecution as well as cause investigation into the matter in regard to the said gross violation of human rights.

According to Lukwago, their team has assembled sufficient evidence to warrant the ICC to commence investigation and possible prosecution of President Museveni.

“We have not been seated, we have told you we have visual and audio recordings as well as documentary evidence and a number of reports and all this evidence is going to be submitted to the ICC,” he said

Pending signatures on the petition

Lukwago says, they seek signatures of at least 2,000,000 Ugandans starting next week.

“We want to take it there with at least two million signatures and tell Bensouda that here is a petition of Ugandans bearing authentic signatures properly executed with evidence. We are going to take enough evidence and that is when people will get to know that President Museveni is not the indomitable lion he calls himself”.

“Next week, Tuesday November 12 at exactly 11am here at Katonga, is going to be the launch of signing on this petition. We have reached out to our colleagues from the change seeking formations and their principals have given a nod to this, actually some of them have got the opportunity of looking at the petition and have agreed with the content plus the procedure we are undertaking. They have assured us that come Tuesday, they will be with us here,” reiterated Lukwago.

He said apart from leaders of political and pressure groups, a number of Ugandans will as well be present to append their signatures on the petition after which signatures of other Ugandans across the country will be sought.

“What we intend to have is a people centred litigation. This is not a Dr Besigye, Lukwago petition or ‘People’s Government’ petition, it is a petition of the people of Uganda in response to the command of article 3 of the constitution which requires them to take action in resist any attempt to abuse people right,” he noted.

When contacted for a comment, the Deputy government spokesperson, Col Shaban Bantariza said that Lukwago and his group are simply politicking and will not go far with their petition.

“These ladies and gentlemen in the Opposition know we are going into a political contestation, they are not ready and not well prepared as usual. So, by saying that they are going to take the President to ICC, they only want to make themselves be felt – they are simply politicking,” Bantariza said.

Bantariza told SoftPower News that the State or government, United Nations and the ICC prosecutor are the only authorities that can refer a case to the ICC, wondering in what category out of the three the ‘People’s Government’ falls.

“They are simply politicking because they want to be relevant and also hoodwink the population that they have means and ways and power and authority to take the President to ICC as well as discouraging the NRM supporters,” he added. 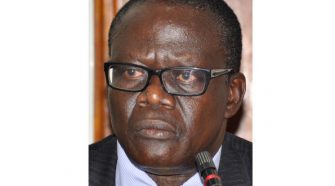