People in Uganda that live with albinism are some of those that have been badly affected by the Covid-19 lockdown measures with many of them unable to access their much needed supplies like sun protection creams.

A number of people with albinism in Uganda have expressed worry over the impact of the long period of lockdown on their health status and wellbeing.

Most of them have since run out of high Sun Protection Factor (SPF) sunscreens used to guard their skin against the sun and preventing burns that can in turn become cancerous.

To be able to enjoy the outdoors, people with albinism must limit their exposure to sunlight by wearing appropriate hats and clothing, and using sunscreens diligently.

However, the task of preventing damage to the skin over a lifetime is a difficult one. Preventing sunburn is important, but not sufficient to prevent sun-damaged skin.

It is an invisible part of the light spectrum of the sun, the ultraviolet light, that damages skin.

The shorter wavelength ultraviolet light, UVB, has a much bigger role in causing sunburn than the longer wavelength UVA. Sunscreens block UVB, so normally pigmented people could tan without burning.

The ban on public transport among other Covid related restrictions have constrained their access to high protection sunscreen to protect their skin against skin cancer.

“The ban on public transport has had a very huge blow for people with albinism across the country. The fact that majority of them are in remote areas makes access to basic medication support services and particular sunscreen which is an essential product for their survival more than impossible to get,” said Peter Ogik, the CEO Source of the Nile Union of Persons with Albinism.

According to Ogik, their organisation has received countless numbers of phone calls from people with albinism requiring the sunscreen but to no avail.

Yet, he explained, majority of people with albinism die before their 40th birthday as a result of cancer.

To prevent this from happening, it is important to ensure the affected people access sunscreen and other protective gear like wide bream huts, sunglasses and long-sleeved shirts among others.

The lockdown has also affected the routine of outreach programs targeting people living with albinism, leaving a major gap and exposing them to likely health risks.

“We have not been able to do our routine skin cancer clinics because of the lockdown and other restrictions imposed. People are asking for sunscreen and food but we have no way out and yet life has to move on normally after all this is gone. How shall we deal with the burden of cancer if our people are not protected now?” Ogik queried.

Lukwiya Jonathan, a youth with albinism revealed that he last received bottles of sunscreen during an event to mark the International Day of Albinism in June 2019 from SNUPA. He was anticipating the next round of supplies of the sunscreen in March during a skin clinic outreach, but this was cancelled due to COVID-19.

He revealed that he was lucky to have gotten extra sunscreen in January this year from a European friend who was leaving the country. But even then, he had to share it with a couple of his friends as well as his mother. However, all these have since run out of supplies.

“You cannot think of even buying it because you do not know where to buy it from but also the cost associated is quite so much that most of our families cannot afford. At times, we just give up and move on with life,” Lukwiya said.

Responding to the impact of the lockdown, Lukwiya, 21 also said life has changed significantly for the worst due to the lockdown. He has been forced to depend on his mum for all his basic needs.

Unfortunately, even the mum who used to sell produce to earn a living could not continue with her business since it involved a lot of movement and yet public transport had been put to a halt.

“Mom stopped and locked up her produce store and resorted to baking pancakes to ensure that we survive. Her usual job was okay but now, she can barely provide enough for the family”.

Ateng Christine, a mother of child with albinism from Aliro village, Kole district revealed that her biggest challenge during this period has been access to medical facilities.

Often, when her son is sick, she is referred to Lira Referral hospital. But she can no longer manage to access the hospital.

To deal with this, she had to send her son Gerald to go and live with her paternal relatives who stay close to Lira town where he can be supported in case of illness.

He says that there are enormous challenges faced by the already struggling persons with albinism and their caretakers, calling for urgent interventions by the community, government, and the private sector.

“There are little actions we can take to inspire action and dignify the lives of the minority group in our country and society as a whole, an Action for Albinism is what we are calling on Larubi,” Larubi said.

Albinism is a congenital disorder characterized by hash grey hair and eyes and white skin caused by partial or complete absence melanin – the black pigmentation. This condition affects over 5,000 people in Uganda. 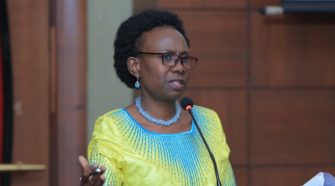