Four security officers involved in the manhandling of the LCV Chairperson of Mityana District, Joseph Luzige have been arrested and now await prosecution by the military Court.

A video clip showing Luzige being pushed has been making rounds on social media since Tuesday evening when the incident happened.

According to Defence spokesperson, Brig Gen Richard Karemire, this happened when a patrol squad was on routine duty in Mityana Municipality.

Karemire says much as the circumstances that led to the incident are yet to be established, the act has attracted a lot of attention from the members of the public and the leaders in Mityana district and beyond.

As such, four personnel who include L/Cpl Anguria Simon Peter, Pte Odeke Simon, Pte Musundi Caroline and Pte Okello Isaac have since been arrested and will be prosecuted by the General Court Martial.

Brig Gen Karemire who revealed that Investigations into the matter have also commenced, said the UPDF strongly condemns the act meted out against one of Uganda’s senior civilian leaders.

“We regret this gross act of indiscipline that is not characteristic of the UPDF as a people’s army,” Karemire said in Tuesday statement.

“We wish to restate that discipline remains a core value and bedrock on which the UPDF was founded. Anyone who deviates from this will always be punished according to the established laws,” says Karemire.

“There are examples to prove this in the recent past like a soldier in Kasese was sentenced to 35 years imprisonment and an LDU personnel was yesterday sentenced to life imprisonment all because of unprofessional conduct,” he adds.

According to Karemire, the Chief of Defence Forces (CDF), Gen David Muhoozi, has sent a team of senior leaders that include Maj Gen Sam Kavuma, the Deputy Commander Land Force (D/CLF), Maj Gen Sam Kawaga, 1Div Comdr and Maj Gen Henry Masiko the Chief Political Commissar (CPC) to Mityana to make an on-spot assessment and confer with both the district leaders and the district security committee.

Karemire says: “The UPDF wishes to reiterate its full commitment and loyalty to the people of Uganda and will always remain subordinate to the civilian authority as provided for under Article 208 of the Constitution.”

He explained that there is no need to lose heart over these incidents because a comprehensive review of the deployments to enforce anti-COVID 19 measures will soon take place and better results are expected. 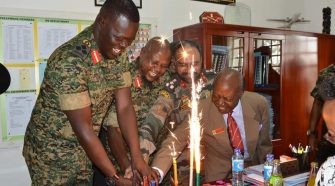