Pharmacy owners in Uganda have asked Parliament to carry out an audit on the National Drug Authority (NDA) activities and operations that have done little to close illegal pharmacies.

The group led by the Legal Secretary of the Pharmacy Owners Association of Uganda, Deo Kalikumutima accused the NDA of allowing the illegal and licensed drug shops to exist in less than 1.5 km from existing pharmacies contrary to regulations set out by the Authority for drug shops.

Pharmacists claim that some of the drug shops sell Class A drugs which is meant for pharmacies when these drug shop owners have no training and license allowing them to give such drugs to patients or clients.

“NDA continues to allow both illegal and licensed drug shops to exist less than 1.5 kilometres from existing pharmacies. We note that NDA has put little efforts to curb the mushrooming illegal drug shops and has put most of its focus on Pharmacies”.

They also blamed the National Drug Authority for levying high taxes on drugs in terms of verification fees that has led to high cost of medicines but also created overdependence by NDA on fees paid by Pharmacy owners.

“We are concerned that the funds collected are used on wasteful expenditure in office construction estimated at Shs 27 billion, rent of space estimated at over Sh1bn despite NDA having its own offices, planned construction of another laboratory,” Kalikumutima said.

He noted with concern that funds collected by NDA were being used on wasteful expenditure in office construction estimated at Shs 27 billion, renting of office space at a cost of Shs 617 million per year yet it abandoned its offices and planned construction of another laboratory.

He asked Parliament to stop the NDA from banning the new pharmacies in Kampala and other urban centres, saying that there is still need for more pharmacies in town centres since one pharmacy currently serves about 1,000 people.

Kalikumutima further argued that NDA should force foreigners to relocate their pharmacies to villages since they access cheaper capital compared to Ugandans.

The committee chairperson, Dr Bukenya has scheduled a meeting with NDA officials on Wednesday this week to respond to the issues raised by the pharmacists. 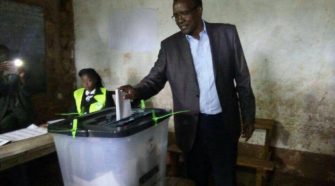