The army spokesperson, Brig Richard Karemire has said that the President’s decision to pick army officers to occupy key positions at the Directorate of Immigration is not militarization of the public service but rather a move that will enhance national security.

On Saturday, this news website reported that President Yoweri Museveni has nominated three high ranking army officers and a lawyer to the Immigration Directorate at the Ministry of Internal Affairs.

The President nominated Brig Gowa Kasita for the position of Director of Immigration and Citizenship. Brig Kasita has been Uganda’s Defense Attaché in Washington.

Col Geoffrey Kambare who has been serving as the Director for Intelligence Collection has been nominated to be Commissioner of Immigration.

Asked by SoftPower News whether this like other similar appointments of military personnel in positions of government that are largely civil would not be perceived as militarizing the public service, Brig Karemire responded to the contrary.

Instead, he says the army which is known to be disciplined and professional is a strategic reserve from which government can source its human resource.

“The UPDF will always remain a strategic reserve from where any government agency can draw personnel. It has very professional and disciplined personel that can be deployed to reinforce institutional effectiveness,” Brig Karemire told SoftPower News on Saturday.

“Placing security experts within departments such as Immigration has been long overdue,” he added.

“Their [security experts] competency will no doubt positively enhance national security and provision of better services to the public through strengthening border security controls as well as checking illegal immigrants”.

The army spokesperson said that issues to do with border security and controlling illegal immigrants are no small matters and that the latest developments (decision by President to pick army officers) should be received positively.

“Take the example of NIRA which has some security experts and has done a great job in a short period of time,” the Brigadier added, citing the agency responsibile for registration and issuance of national identity cards.

Museveni’s critics, especially the political opposition have previously criticized the decision by the President to appoint army officers in areas like agriculture, fishing and Police. They argue the approach breeds high handedness and that it is a strategy by President Museveni to entrench himself into power since he is the Commander-in-chief and the army is loyal to him.

However, many members of the public always welcome appointments of army officers citing UPDF’s track record of success, discipline and maintenance of security in the country as well as their contribution to peace and stability elsewhere in Africa. 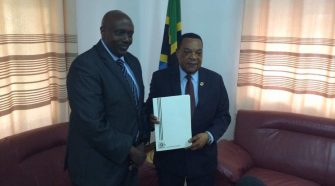