The Minister of Education and Sports, Janet Kataha Museveni has come out to clarify on why the Ministry chose to release the Primary Leaving Examination (PLE) results for 2019 at a private facility – Kampala Parents Primary School -, owned by a city tycoon, Sudhir Ruparelia.

The Ministry announced on Wednesday that the release of the exams will this time round take place at the private facility.

Unlike the previous cases where the results were officially released at the Office of the Prime Minister, this time the Ministry said the ceremony will take place at Kampala Parents School in Bukoto.

This is the first time UNEB will be releasing results in a private facility. The development has sparked queries from a section of the public.

On Thursday, the Minister of Education was tasked by Budiope West MP, Robert Musoke to explain why government would go ahead and hire a private facility for the release of the exams and leave out government facilities.

Professor Bbosa Lutalo, the former UNEB board Chairperson had earlier come out to object to the decision that was taken by the Ministry leadership.

“Normally results are released at a neutral environment. Kampala Parents in this instance is not a neutral place. It has a primary class. It is going to be one of the recipients of the results. This makes one wonder whether government has vested interests in the school,” Prof Lutalo told Daily Monitor newspaper.

In response, the Minister said she sees no problem in hosting the release of PLE at Kampala Parents since it has not charged government money for the venue.

“Kampala Parents is a primary school. It doesn’t charge us, we are paying nothing to release the results there. We normally use the President’s office hall because we are strictly not willing to pay for halls when we have government halls. But it has had problems with its air conditioning and we can’t put people in a place that has no fresh air,” Janet said.

“So we were looking for other places where we can go and yet not pay that is how we got into Kampala Parents. I don’t know the difference in government schools or private schools if we are not paying for our being there. So what is the difference? Nothing! So that was the reason.” 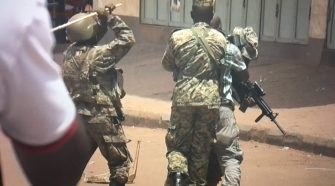