The event took place at the office of the Prime Minister in Kampala and was presided over by the First Lady, Janet Museveni, who also doubles as the minister of Education and Sports.

The outcome of the results indicate that despite girls who registered for last year’s PLE, being more than the boys, the latter performed better. On this the minister credited parents for appreciating that both deserve equal privileges including education.

She however said that while this is good news for th girl child, stakeholders need to find out the reasons for this gender disparity because over time it might be a reversal of a previous problem where more boys were in school compared to the boys.

She further expressed pleasure with the increase in the number of children who registered for the 2018 PLE. Candidates increased from 3.9% in 2018 compared to 0.8% in 2017.

People can access results by sending a text message through their phones by typing PLE leave space and then the full index number of the pupil and the send to 6600. Others can use the link; https://ereg.uneb.ac.ug/results.

This indicates an increase in the number of candidates and centres in the previous years. Unlike 2017 where percentage increase was only 0.8%, in 2018, candidates increased by 3.9%.

1,128 learners with disabilities registered for the 2018 PLE.

Although, Mathematics had been the worst done with only 77% of the learners passing it, but an increase at distinction level was registered.

He said in English and Mathematics, performance was poor in questions which required application of knowledge in problem solving questions.

Learners however, improved in handwriting.

The examinations body has withheld results of 3,500 candidates on suspicion of examination malpractice pending completion of investigations.

According to Odong, a number of teachers in different schools were found by security officers giving external assistance to learners in the examination rooms by writing answers on the chalkboard for learners to copy prompting withdrawal of results of 50 schools across the country.

He said they will be accorded a fair hearing by the Board’s Examination Security Committee. 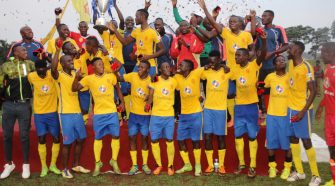