At least four medical interns were arrested by Police in Kampala Monday as they walked to Parliament in protest against the unpleasant conditions under which they work.

The medical interns were scheduled to hold a march from Mulago hospital to Parliament to deliver a petition to the Speaker, Rebecca Kadaga requesting for good training,  welfare and good remuneration.

However, SoftPower News understands that four of them were arrested in the course of the march as they proceeded to Parliament.

The four who were arrested include Dr Mirembe Joel, the outgoing President of the Federation of Medical Interns. Others have been identified and Dr Otim Joseph Gutagwa, Kyakunizire Faith and Kiggundu Roland.

The Deputy spokesperson for Kampala Metropolitan Police, ASP Luke Owoyesigyire told this news website that the four face a charge of holding an unlawful procession.

He said they are being held at Wandegeya Police station.

During a news conference last week, Dr Joel Mirembe shared his experience when he painfully endured difficult conditions during his internship at Mulago hospital which included having to commute from Kalerwe on foot.

Mirembe said that by implication, a psychologically stressed doctor is harmful to their patients as they would not be in position to make good judgment.

We would like to thank all medical students nationwide for supporting the noble cause.. Not even rain stopped us pic.twitter.com/8G0GmzaR5H

They demand a better rotation policy which they say will enable them acquire the requisite practical skills, a tax-free allowance, salary increment and national induction before internship begins.

They argue that they are the front line health workers delivering critical health care in most of the government aided hospitals and work overtime as their profession demands, yet they continue to be poorly remunerated. 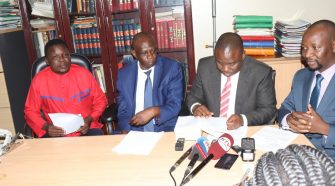