The Uganda Police Force have Thursday evening arrested a man said to have been disguising as son to the recently appointed Inspector General of Police (IGP), Martin Okoth Ochola to con police officers of their money in exchange for job promotions.

The arrested is Mr Oloka Patrick and it is alleged that he has been charging up to Shs 500,000 from every officer awaiting ‘promotion’.

“We have arrested a suspect who allegedly obtained money from Police officers in return for promotions, on pretence that he was a son of the Inspector General of Police, Martins Okoth Ochola,” Police said in a statement.

Our efforts to talk to police officers who have fallen victim to Mr Oloka’s dubious actions were futile since the Police code of conduct only grants the official police spokespersons to address the media. 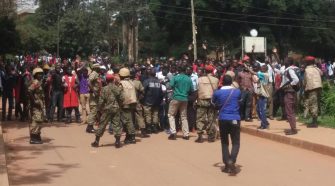