Police in Wakiso district is holding a man who is alleged to have killed his two and half year old son and dumped his lifeless body in a pit latrine.

The suspect who has been identified as Busuulwa Patrick, 23, is a resident of Ssumbwe village, Ssumbwe parish in Wakiso district.

According to Kampala Metropolitan Deputy Police spokesperson, ASP Luke Owoyesigire, the incident occurred on October 3, when Busuulwa, a local plumber hit his biological son, Simbwa Patrick, on the floor of his house killing him instantly.

Busuulwa would thereafter pack the body in a blue polythene bag and dump it in the nearby swamp three days later on October 16 at around 9pm. From there, he transferred the body and dumped it in the neighbour’s pit latrine.

“It was recovered in a blue polythene bag dumped in a pit latrine belonging to a one Nsereko Noah, 38, in the same address,” ASP Owoyesigire told SoftPower News on Thursday.

“It was retrieved by the Fire Brigade Police,” he says.

A day before the body was retrieved, Patrick Busulwa, the child’s father reported a case of  child disappearance, to the local authorities.

The authorities informed the  police which interrogated the child’s father and established by confession from the suspect,  that he had murdered the child.

He led Police to Nsereko Noah, the said neighbor’s pit latrine, where the body was found.

The two have been charged with murder.

“Police appreciates the strong collaboration from the local authorities in sounding out this alarm,” Police said in a statement.

The body was taken to Mulago City mortuary for post mortem and police has also arrested the deceased’s step mother, Mukirwa Allen, 18, to aid the investigations. 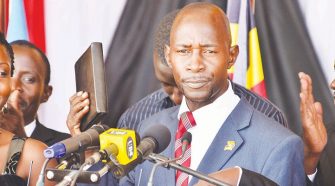