Police in Kampala Wednesday used the recently installed CCTV cameras in the city to arrest a man who had snatched property from passengers in a taxi.

In a video clip released by security, a man is seen confidently crossing from one side of the road and approaching a taxi from the back. He then peeps into the open window before he jumps and snatches something from a passenger in an instant.

He then ran away with the grabbed property.

Police has in a statement identified the arrested man as Esau Nduhukire, and that the taxi from which he stole was around Shoprite Supermarket along Entebbe road.

“Results of the recently installed CCTV cameras are beginning to show up. This follows arrest of Esau Nduhukire recently caught on camera stealing from passengers stuck on traffic jam at Shoprite along Entebbe Road Charges of theft have been preferred against him,” Police said in a statement.

Nduhukire was arrested alongside Musa Byamukama whom the former confessed he sold the stolen property, some of which were found in his possession.

President Yoweri Museveni gave a directive to install surveillance cameras in 2017 while attending the vigil of former Police Spokesperson, Andrew Felix Kaweesa who was assassinated by unknown gunmen.

However, the President’s directive was not effected until another assassination of former Arua Municipality MP, Ibrahim Abiriga in June last year.

In September last year, Police said that together with Huawei experts, the company contracted to set up the system, had already installed CCTV cameras in different parts of the Kampala Metropolitan Area. A total of 122 CCTV cameras had been installed by October 2018, out of the 150 cameras that will be deployed in Kampala.

Police said at the time that installed CCTV cameras have the capacity to detect number plates of vehicles as well as identifying faces of suspects, something many critics didn’t not believe, but the arrest of Nduhukire has proved Police right. 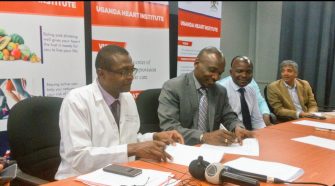