Security teams have traced and arrested one of the cyclists who was recently captured on CCTV cameras vandalizing government vehicles.

On June 27, Kampala Metropolitan Police spokesperson, SP Patrick Onyango, said they had noted that criminals using motorcycles had embarked on attacking and damaging government owned vehicles while on the road.

He said the criminals use improvised petrol bombs which they hurl in the vehicles and metallic objects to hit on the windscreens.

Onyango said three incidents had been reported in different parts of the city including Katwe, Nateete and Busega and that Police suspects that the criminals’ intention is to force government to stop health guidelines against carrying of passengers by boda boda motorcyclists that government put in place to contain the spread of Coronavirus.

“The joint security teams have identified five suspected criminals, who have been using these motorcycles and we are pursuing them. One of the motorcycles is registration number UEU 391F,” said Onyango.

The suspects, he said, attacked a government vehicle registration number UG 0450T on June 23, 2020 but the occupants survived unhurt.

He noted that in the second incident, the suspects politely asked the driver of motor vehicle registration number UG 0182H to stop for them to cross. When the driver stopped, they pulled out a hammer and hit the windscreen.

“The criminals were unable to execute their crime and fled after their hammer fell in the car.
The third was conducted at Busega-Mityana Roundabout when criminals hurled a flammable liquid in the bottle in a government vehicle registration number UG 0199K, a Toyota Fortune on June 26, 2020,” he said.

“This explosive busted into flames on the co-driver’s side, but the public nearby extinguish the fire,” he added.

Police would later release CCTV camera photographs of the suspects on the motorcycles and said their hunt was on.

Now on Monday, Onyango without delving into giving identities, said one of the suspects had been arrested from Nansana on Sunday.

“The suspect whose identity we will not disclose right now, was arrested in Nansana Municipality, Wakiso district, yesterday with the help of CCTV cameras,” said SP Onyango.

After the arrest, Onyango says, the suspect was then transferred to Katwe Police Station for further management.

The suspect who is a boda boda rider around Ham Towers is said to have admitted that he is the one in the picture police released.

Police say they are still looking for other suspected criminals who have been involved in these criminal acts and will all be charged with malicious damage to government property and other offences. 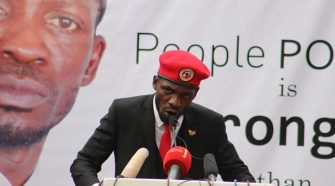