The Uganda Police has Monday called upon the public to remain security vigilant while taking part in festivities ushering in the new year.

While addressing the press on Monday, Police spokesperson, CP Fred Enanga announced that police has slapped a ban on burning tyres and firing bullets as part of celebrations of entering the new year. This he says is intended not to put lives of people at risk.

“We call upon the public to put security on top of their “must have” lists this New-Year by being extra vigilant and on the lookout for any suspicious persons and behavior and inform the police. Therefore anyone putting other people’s lives at risk or disrupting the peace and safety of others, will be dealt with accordingly. There shall be no burning of tyres, firing of bullets as part of celebrations,” Enanga says.

“The police in close coordination with emergency service units and lifeguards along all beaches are warning holiday makers and revelers to usher the New Year, 2020, in a safe and responsible manner. Our teams will be targeting alcohol related acts of violence and, anti-social behavior,” he adds.

According to Enanga, despite having specific threats for an attack on New Year’s Day, Police is monitoring closely the recent terrorist attacks in Somalia and has adjusted plans both overt and covert. He says the public will continue seeing their visible security presence with police patrols and additional security from the military and LDUs in crowded places.

“We also have an additional layer of protection with specialist units at selected locations, with the right intervention and response capabilities to counter all forms of hostilities, deployed along with our k9 unit, use of CCTV and other automated and scientific methods, as part of our security master plan to meet any threats as people celebrate the end of a year and usher in New Year,” says the police spokesperson.

In 2015, dozens of revellers drowned and died on lake Victoria on Boxing Day and their bodies were discovered along the shores near the airport and around beaches in Entebbe.

The Police said they suspected that some of the deceased went to swim when they were drunk while others allegedly swam beyond the demarcated areas and there were no attempts to stop them.

To avoid a repeat of the 2015 incident this year, police has set up strict guidelines for swimming at the beach during the new year eve, including not swimming beyond 6pm.

“All beach goers should not go swimming unless they are in a well-defined swimming area. We further appeal to the public to follow instructions on signboards and listen to lifeguards at all beaches, avoid using inflatable’s, watch for changing conditions and tidal currents, weak swimmers to be supervised at all times. Management should have zoning flags and appropriate rescue aids,” says Enanga.

He explains that the police and UPDF marines will conduct patrols and provide support to the beach management and that they will further ensure no revelers and swimmers are in the waters by 6pm. 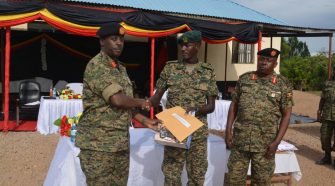