Police has come out to fault the National NGO Board of Uganda for failing to raise a red flag on the illegal nature of the Usafi mosque where security agencies recently found over 100 hostages and several weapons.

Last week, Police together with the military raided the mosque located near Usafi in Kampala and rescued women, boys and children alleged to have been held hostage inside the precincts of the mosque. Several rounds of ammunition and machetes were also discovered inside the mosque.

The news prompted an outburst from the community around the mosque who blamed Police for ignoring their reports regarding the suspicious manner in which the leaders of the mosque conducted themselves. Some muslims said they had been restricted access to the mosque while other parents said they had knowledge that their children were held there, but could neither be helped by Police nor the Uganda Muslim Supreme Council (UMSC).

One of the families whose two children had been missing and later found in the mosque reported the matter to Police in Mutundwe but were told that Police could not investigate religious related issues. The family was instead referred to UMSC.

Similarly, UMSC denied knowledge of the mosque at Usafi and therefore couldn’t intervene.

Shortly after the raid on the mosque, the Uganda Muslim Supreme Council spokesperson, Hajj Nsereko Mutumba told the press that the said mosque was not registered and as such illegal.

On Monday, journalists pressed Deputy Police Spokesperson, Patrick Onyango to respond to allegations made by locals living and working near the mosque that Police did nothing to investigate the mosque.

Onyango together with the Deputy Army Spokesperson, Lt Col Deo Akiki had summoned a news conference to update the media on the investigation regarding the incident at the mosque.

“Mosques and churches are registered under the NGO Board. They are the ones supposed to come up and complain to us that a mosque is illegal before we come in,” Onyango responded.

“NGO Board are the ones in charge of registering these mosques. Now that the issue has come up, we shall go back to NGO Board and inquire from them whether the mosque was registered,” he said.

“Yes, there were some reports but we had to double crosscheck to find out whether it was true”.

Meanwhile, Onyango has said that Usafi mosque still remains a crime scene and that Police can not at the moment give a definite date when it will be reopened. 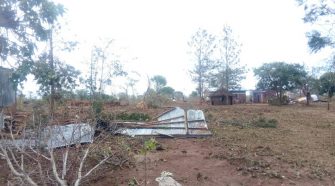