Kyadondo East legislator, Robert Kyagulanyi Ssentamu alias Bobi Wine, is again at loggerheads with Police after a meeting he was scheduled to hold with a group of NRM youths in Nakaseke district was stopped.

NRM youthful political activists and leaders in Nakaseke district led by Kasoma Zaake, on December 11 wrote to the District Police Commander (DPC) informing him of their planned meeting scheduled for this Saturday December 15, and that MP Kyagulanyi was to preside over it.

In response, the DPC, SP Justus Asiimwe, has said that only the Inspector General of Police (IGP) can grant permission to such an event since it involves a Member of Parliament from another constituency.

“I note that the function you are organizing is to be presided over by a Member of Parliament of another constituency-Kyadondo East Hon Kyagulanyi Ssentamu Robert. This makes the function national in nature and permission must be granted by Inspector General of Police,” read Asiimwe’s letter in part.

“You are requested to observe the following and other laws with respect to Conduct of Assemblies/functions, Public Order Management Act, Penal Code Act and Police Act,” added SP Asiimwe.

Police say that until the organizers of the meeting have availed the IGP all the relevant information and permission is granted to them, the meeting is not allowed to take place.

When contacted on the matter, Kasoma told SoftPower News that he is not moved by the Police decision to block their function, adding that they will soon announce their next move.

“It is fine for Police to do what they want but we remain focused. I have sent this letter to Hon Kyagulanyi and i am waiting for his response. If he says that we call it off, we will definitely do,” he explained.

The youths belong to the ruling NRM but came out recently and accused President Yoweri Museveni of sidelining them, leaving them poor and helpless yet it was in their area (Luweero triangle) that he fought and took power.

They said that President Museveni has always got almost 90% of votes in their district in all the previous Presidential polls, something they claim the President does not appreciate.

The angry youths accused the President of what they called “splashing” money to the urban youths especially in Kampala and Wakiso, who according to them do not even vote for him yet forgetting the “block vote” in Nakaseke.

They threatened to join Bobi Wine’s ‘People Power’ movement if their concerns are not addressed in the shortest possible time.

In fact, a number of them visited him at his home in Magere, Wakiso district days after Bobi Wine returned from the U.S where he had travelled for specialised treatment in August this year. During their discussion, the musician turned politician pledged to pay a visit to Nakaseke before the end of this year.

Last week, Bobi Wine and other members of his music group, Fire Base Crew, attempted to meet the Police chief over allegations that Police is frustrating his music shows and concerts, but failed to access him. 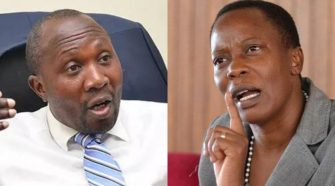