The Uganda Police Force has announced that the Force has confirmed at least 985 cadet officers in service to the rank of Assistant Superintendent of Police (ASP).

This is the first phase, according to a statement issued by Deputy Spokesperson for Police, ACP Polly Namaye.

More cadet officers to be confirmed in the second phase, Namaye said.

“We congratulate all the officers who have been confirmed upon achieving this milestone. We also encourage them to continue exhibiting this spirit of national service and discipline in all their assignments”.

Two officers have been confirmed posthumously.

“We thank God for the service they rendered to the force from the time they were recruited”.

The Police says there has been mutual cooperation between members of the public and the force.

The security agency has pledged that the officers who have been confirmed will continue to exhibit the same level of professionalism, or even better.

SoftPower News made efforts to reach the Police spokespersons to understand what the confirmation implies and why some of the individuals were not confirmed.

A source within the Police who preferred to speak under anonymity told this news website that some other cadet officers have not been confirmed.

In total, about 1,100 cadet officers were passed out in the 2015 batch. This implies that about 115 have not been confirmed.

This is unusual, according to the source who was a cadet Police officer in the previous batch (those that finished training in 2014).

Assistant Superintendent of Police (ASP) is the first rank for officers who have undergone cadet officers training. Upon completion of the training, these officers serve on probation in the different fields of Police after which they are vetted and those that meet the standards are confirmed.

The successful candidates (those confirmed) will henceforth have 3 stars on a black background as opposed to the white background (during probation time).

“They serve under probation and when there is need for recruitment, their probation time can be shortened”.

“However, this intake (2015) has been under investigation by the IGG. That’s why many others have not been confirmed in this lot,” the source told SoftPower News.

Others were not recommended by their immediate supervisors (such as DPCs or OC stations) due to their unprofessional behavior. The source says some of the officers could have been involved in robberies, corruption or other offences.

Those that have an ongoing court case against them or are subject to an investigation can not be confirmed.

“During probation, you are a student and we expect you to be a good student. A report has to be written on every individual and these reports are vetted by the Police appointing council”. 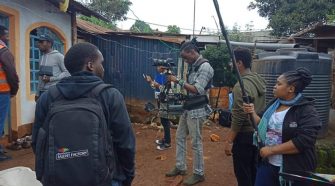