A Police officer together with a member of the Village Defence Unit have Monday been charged with aggravated torture and remanded to Kitalya Prison.

The two are Francis Mpande (a Police officer at the rank of Constable) and Asimwe Junior (member of a Village Defence Unit).

The two were arrested over the weekend along with Constable Noah Massajjage, who was also in charge of the patrol exercise.

They are accused of beating up a pregnant woman identified as Mercy Nakate accusing her of flouting COVID-19 guidelines.

A one Edirisa Kitooke, a Parish Intelligence Security Officer (PISO), and another only identified as Ndawula, who were reportedly part of this operation are said to be on the run.

Nakate, 23, a resident of Busega, Kibumbiro Village, Busega in Rubaga, Kampala, was reportedly beaten on March 27 by a group of policemen and village defence unit officials who were conducting a patrol.

According to Nakate, who is seven-months pregnant, on the fateful night she had moved out of her house to buy a herb (emumbwa) when rain forced her to seek shelter at a common makeshift socialisation facility used by residents.

“It was then that the policemen who were on patrol found us and immediately began beating us. The other people ran away but given my condition I could not run. They descended on me, hitting and kicking me despite my cries for mercy,” she said.

Her colleagues later came and helped her get back home. The following day, she went to report the case to the nearby police station, but the officer in charge instead convinced her to drop the matter in exchange for medical support.

However, the President got to learn of the incident and Friday directed Lt Col Nakalema to investigate the matter.

“We continue to receive numerous complaints from around the country and a team has been assembled to address such concerns. We appeal to the public to continue reporting any cases regarding torture by security forces in this period,” the State House Anti Corruption Unit wrote on Twitter on Monday.

The two accused persons (Mpande and Asiimwe) have been remanded until April 27 when they are expected to return to court. 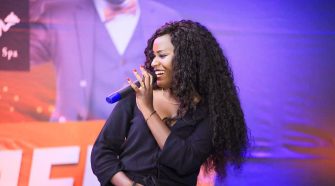