Police have opened up on the incident in which pupils and teachers of Winterland primary school who were moving to perform at a function in Nkumba were badly beaten by members of Boda Boda 2010 on Tuesday.

The children were dressed in the national flag colours with red scarfs on their heads as part of the dance costume.

According to police spokesperson Asan Kasingye, the people seen beating the school children were not working for police or under its instructions.

“We have kicked off investigations into this incident .We would like to inform the public that we shall leave no stone unturned in arresting all those involved,” Kasingye said in a statement released on Thursday.

He also asked members of the public to refrain from taking the law into their hands in case of any incident as witnessed on Tuesday at Busega.

The police mouthpiece encouraged the public to report to police when they suspect a crime has been committed or is about to be committed so as to be addressed well.

“You should cooperate with us in the investigations and prosecution of crime as witnessed in courts of law.” 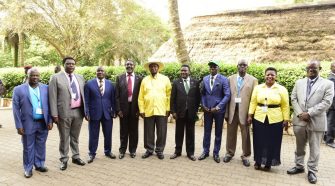