Police in Jinja town on Wednesday foiled an attempted robbery on a KCB bank.

The incident occurred at around 8pm on Wednesday at the bank premises along Jinja main street.

It is alleged that two private security guards attached to Pinnacle Security in company of an unidentified person stormed the bank and put three bank staff at gun point.

They demanded for money, according to a statement by Police.

However, the manager who had stepped out briefly returned and found his staff at gun point.

The suspects are said to have tried to intercept the bank manager from running out of the bank but failed and only grabbed his phone.

The Manager rushed to Police to report the incident. Local Police responded immediately.

On suspicion that the Manager could have notified Police the trio fled the scene abandoning one gun.

There had been reports circulating on social media late on Wednesday that security operatives had besieged the bank in Jinja.

It isn’t clear as to whether any arrests have been made yet. 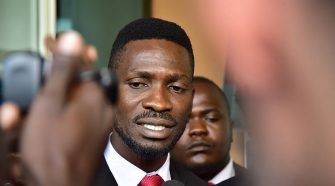