The Uganda Police has given a greenlight to the BBC and NBS Television, to carry on with their investigation into the alleged theft of government drugs which are then sold on black market.

This follows the release on Police bond of three BBC journalists, their driver and wife to NBS news anchor, Solomon Sserwanja on Friday morning, after spending two nights in Police cells.

They were arrested Wednesday night by Police on actionable intelligence surrounding the alleged purchase and sale of government drugs.

The three journalists are Godfrey Badebye, Rashid Kisame, Muhammad Kassim all from the BBC and their driver Shafiq Kisame.

Sserwanja who was not at home at the time of arrest would later defy reporting to Police until Friday morning when he appeared with NBS’ News manager, Joyce Bagala and recorded a statement. He was later released on Police bond as well.

NBS says the suspects were arrested on duty as they were working on a joint investigative story with the BBC, on theft classified government drugs.

While addressing the media at the Central Police Station in Kampala, Police Spokesperson, CP Fred Enanga, said that Police appreciates the role of the media in eliminating corruption in the country, saying that such good efforts shouldn’t be gagged.

“We are aware of the important role the media plays in investigative reporting, debates, discussion, background and analysis, as well as new stories, not withstanding their journalistic duty to obey the ordinary criminal law, in the course of their duties, and we highly commend them for their tireless efforts in fighting corruption,” Enanga told reporters at CPS.

He said that Police has since understood that indeed NBS Television and the BBC while working on a tip, independently planned and carried out their operations surrounding the illegal sale of government drugs in select government hospitals in Arua, Gulu and Kiruddu hospital.

“It is clear that their motive was to show how easy it was to buy government drugs and its conduit,” he said.

“We do encourage them to continue with their documentary programme and achieve their intended objective of exposing their targets, to help prevent such occurrences in future,” he added.

He says that Police has already created a task team which is building further on the available facts on file, to establish the culprits behind the alleged theft and sale of government drugs, in these government hospitals and will ensure all suspects that are criminally liable are brought to book.

On the fate of the released journalists, Enanga says that Police is working with the office of the Directorate of Public Prosecution (DPP) for legal guidance on as to “whether the journalists mentioned above, in their quest for a story of essential importance to society could have breached any rules on the acquisition of government drugs and its safety considerations or not.”

Meanwhile, while speaking to reporters after recording a statement at CPS, Solomon Sserwanja said that he is not to relent on exposing evils in government sectors, for the good and benefit of society. 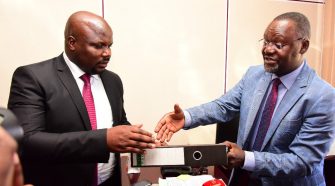