Police has again refused to clear Bobi Wine for his music concert during the Easter weekend, the Afro pop singer has said.

Robert Kyagulanyi (Bobi Wine) who doubles as the Member of Parliament for Kyadondo East told reporters in Kampala on Tuesday during a news conference that Police is yet again blocking his music concerts with no clear reasons.

The singer says he had scheduled a concert at his One Love Beach in Busababala on Sunday which he notified the Police about in advance. However, permission has not been granted thus far, the ‘Kyarenga’ singer said.

“We are here to communicate to the country and the world at large that yet again in this Easter season the government of Uganda through Police has continued to restrict our performances, it has continued to infringe on our rights,” Bobi Wine said.

“We wrote to Police over a month ago informing them that we are gonna have concerts. We wrote to them about our concert at Busabala which has been happening for the last 10 years,” added the opposition singer who recently expressed interest in running for President come 2021.

He said he had other planned concerts in Lira, Arua and Gulu which he notified Police about through writing and sought their security.

“The Uganda Police has not responded to us”.

Popular music events promoter Andrew Mukasa of Bajjo Events who was at the news conference said Bobi Wine is entitled to a right to perform like any other musician.

“This is not about Bobi Wine. He has a right to be sponsored like any other artiste. He has not violated any law,” Bajjo said.

“Last year, they told us that promoters did not fulfill the requisite procedures. Today, if you hear about Abitex or Bajjo events, you know that these are accomplished events organizers who are professionals and are aware of the laws,” Abbey said.

SoftPower News made attempts to reach the Police spokesperson as well as his deputy for a comment on the allegations by Bobi Wine, however, none of the two officials was available.

Towards the end of last year, Bobi Wine accused Police of inconsistency after he was forced to move his Kyarenga concert from Namboole stadium to his Busabala beach. He had been subjected to lengthy and inconclusive procedures by both Police and the management of the stadium.

He accused the Uganda Police Force leadership of not being forthright with him regarding clearance for the event, as required by law.

The concert later happened but after Police spelled out stringent conditions to the singer including a condition that the event was typically entertainment and not political. However, like many had anticipated, the event was characterized by political statements with the singer rallying youths to register for national identity cards ahead of the 2021 Presidential elections.

During the festive season in December 2018, several of his concerts including those in upcountry towns like Gulu and Mityana were also stopped by Police who claimed he had not secured the requisite permissions.

In the wake of persistent restrictions (after stopping his concert on Boxing Day), Bobi Wine said he would not cow to the intimidation by President Yoweri Museveni and his regime.

“Through these actions, you [Museveni] are revealing who you truly are – a brutal, cold and cowardly despot. You think you are hurting me and my dependents by blocking my sources of income, but you should know that the world is watching,” he said in December.

He said that he was ready to sacrifice the show on Boxing Day which he has held every year, “if this is one of the many sacrifices I have to make for believing in justice and freedom”.

“I will assure you once again that your intention to break my resolve through harassment and intimidation will certainly fail. I shall not kneel before you,” the legislator vowed. 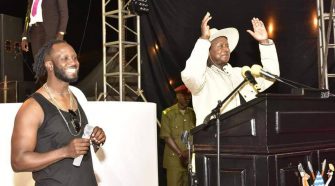