Police in Kampala Metropolitan area has arrested 24 people and impounded 171 motor vehicles (mostly taxis) and 489 motorcycles in an operation to enforce the Presidential directives issued Wednesday.

President Yoweri Museveni suspended the use of all public means of transport including boda bodas, buses, and trains, for 14 days.

Museveni said the move is aimed at “causing people to postpone their unsafe journeys”.

Only passengers moving in private vehicles will be allowed, but even then the limit as been set – a maximum of 3 people including the driver.

Museveni said the cargo trucks will continue moving, especially those delivering food and other essential commodities.

On Thursday Police along with other security agencies carried out enforcement in parts of Kampala to ensure compliance.

In a statement, Kampala Metropolitan Police spokesperson, SP Patrick Onyango said that the suspects who were arrested were violent and aggressive towards Police Officers during the arrest.

“The enforcement involved deploying in strategic areas, along routes that lead to the City Centre, Markets, Taxi and Bus terminals and setting  checkpoints,” SP Onyango said.

Police says that although majority of the population adhered to the directives, there are some indisciplined elements who  attempted to defy the orders.

“We decided to impound their Motor vehicles, Motorcycles and arrested those violating the directives”.

Some other 14 suspects were arrested around Container village in Central Kampala for attempting to steal from a motor vehicle along Burton Street.

Police was informed and responded and the thieves tried to run away but they were chased up Container Village where they were arrested, according to Onyango.

The suspects are currently being detained at CPS Kampala on  theft charges.

Police says that apart from the few minor highlighted incidents above, Kampala Metropolitan area is peaceful and business in the the various cleared places is going on smoothly.

The operation will continue on Thursday. 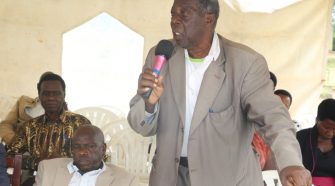