Police has issued traffic guidelines for the general public and motorists in Kampala to follow during the groundbreaking ceremony for the Kampala flyover project tomorrow, Wednesday.

On Wednesday December 19, President Yoweri Museveni will preside over the official groundbreaking ceremony for the construction of the Kampala Flyover project.

Construction for the Kampala Flyover, the first of its kind in Kampala city, is set to begin in January next year.

According to Kampala Metropolitan Traffic Police Commander, SSP Norman Musinga, the occasion will take place along Kafumbe Mukasa road in Kampala, at around 0600hrs

Musinga says in the issued guidelines that there will be normal traffic flow along Queen’s way from the city, but motorists from Entebbe to the city will be diverted to Zana round about, Stella – Namasuba Junction and Kibuye Round About.

In the same way, traffic from the city centre will not be allowed to access Katwe Wansi and Kafumbe Mukasa road.

Musinga has in addition encouraged the general public to adhere with the issued guidelines to avoid inconvenience. 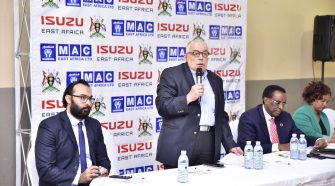